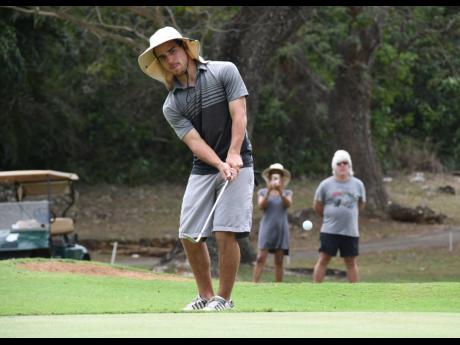 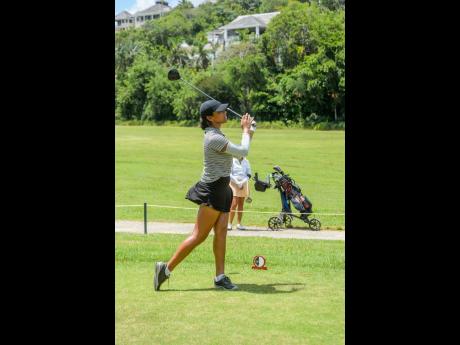 THE HALF Moon Golf Course in Montego was filled with excitement over the past weekend, as the island’s top prospects battled it out for top honours at the Jamaica Golf Association National Senior Trials.

When the dust settled, it was Justin Burrowes and Emily Mayne who would walk away as respective male and female champions following four days of intense competition.

Burrowes had to secure the men’s 0-6 category the hard way, as he lagged behind Sebert Walker Jr by 11 shots at the end of the second day at the Cinnamon Hill course, but capitalised on the leader’s stumble on the third day to make up some valuable ground.

Walker Jr was looking good after shooting eight under par 64 on the second day but dropped six shots on day three when he carded six over par 78, while Burrowes shot one under par on day three to cut the lead to four.

The final day was set up nicely, as Burrowes opened with an eagle, followed by birdies on holes seven and nine for a four-under par 32 on the front nine to add more pressure to Walker Jr.

For Burrowes, the comeback win was a testament to the hard work which he had put in before the trials.

“The last few days were eventful. It is tough to mentally readjust your game plan to a different golf course halfway through, but I am proud of the way I battled through it.”

For Walker Jr, a costly error on the final hole let slip what could have been a remarkable win.

“The final round was a little better, just a few mistakes as I went through the day that I definitely would have preferred not to have made, such as the costly one on 18 where I turned my driver out of bounds, so that one pretty much came down to the wire with me and Justin and that one kind of cost the game,” said Walker Jr.

The top five spots were completed by Ryan Lue, who shot one-under par 71 for a total score of 13 over par 301 for third place, with Rocco Lopez and William Knibbs tied for fourth place after carding scores of 17 over par 305.

On the lady’s side, Emily Mayne outplayed the JGA President Jodi Munn-Barrow and Mattea Issa to win by eight shots, following scores of 78, 79, 77 and three over par 73 on the final day for a 309 total.

Munn-Barrow posted scores of 80, 76 82 and 79 and was the day-two leader but had to settle for the runner-up spot after totalling 317 for the four days.