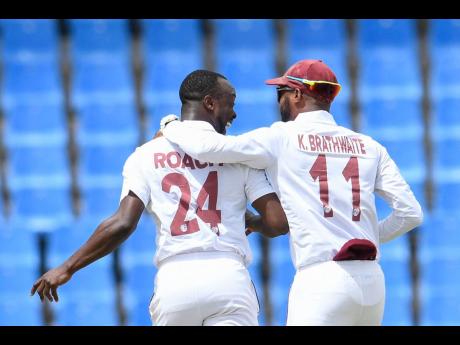 CWI Media photo/Randy Brooks
Kemar Roach (left) and Kraigg Brathwaite of the West Indies celebrate the dismissal of Najmul Hossain Shanto of Bangladesh before lunch on yesterday’s opening day of the first Test between Bangladesh and West Indies at the Sir Vivian Richards Cricket Stadium in North Sound, Antigua and Barbuda.

It was a day when the West Indies bowlers worked well together to first restrict the Bangladesh team, and then captain Kraigg Brathwaite was his usual sedate self at the crease to help the regional side take day one honours in the first Test at the Sir Vivian Richards Ground in Antigua and Barbuda.

The seam bowling quartet of Kemar Roach, Jayden Seales, Alzarri Joseph, and Kyle Mayers ripped through the hapless Bangladesh batting unit for just 103 runs after which captain Brathwaite hit an unbeaten 42 to lead the host to 95 for two at stumps and within eight runs of a first-innings lead.

The toss proved crucial to the home side, who immediately sent in the visitors on a track that was offering some slow sideways movement. If there was some doubt that Roach was carrying an injury, he swiftly allayed those fears by picking up two quick Bangladeshi wickets with just three runs on the board.

Seales and Joseph made sure that the poor start by Bangladesh did not get any better. Seales sent back former captain Manumul Haque for nought and then Joseph had opener Tamim Iqbal caught down the leg side by wicket-keeper Joshua Da Silva for 29 at 41 for four.

Mayers also got in on the act, and he, too, snared two quick scalps to leave the visitors in tatters at 76 for six at lunch.

Captain Shakib Al Hasan tried to breathe some life into the innings with some brave shots. He was the ninth wicket to fall after he made a fighting 51 runs from 67 balls with six fours and a six.

Joseph finished with career-best figures of three for 33 while Seales also got three wickets. Roach had two wickets for 21 and Mayers bagged two for 10.

To say that the West Indies began their reply sedately was an understatement as captain Kraigg Brathwaite and John Campbell crawled their way to tea at 15 without loss off 15 overs.

On the resumption, the pair turned things up just a notch, with Campbell hitting one four and a six in his knock of 24. He would, however, become the first wicket to fall with the score on 44 when he played on from seamer Mustafizur Rahman.

Raymon Reifer then joined his countryman Brathwaite, and they added 28 runs for the second wicket before Reifer got a peach of a delivery from seamer Ebadot Hossain and was caught behind for 11.

Jamaican Nkrumah Bonner and Brathwaite made sure no further damage was done as the pair inched their way to 95, with Brathwaite unbeaten on 42 and Bonner 12.

E. Hossain not out 3