Roach bags five but West Indies wobble in chase of 84 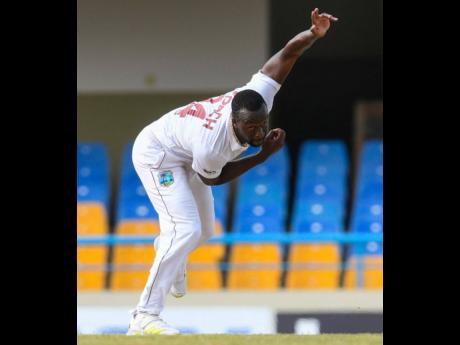 Contributed
Kemar Roach, of West Indies, bowling during the third day of the first Test between Bangladesh and West Indies at Vivian Richards Cricket Stadium in North Sound, Antigua and Barbuda, on June 18, 2022.

Fast bowler Kemar Roach claimed his 10th five-wicket haul, as the West Indies dismissed Bangladesh for 245 run sin their second innings on day three of the first Test in Antigua.

When stumps were drawn, the home side were 49 for three, chasing 84 for victory, still needing 35 to secure the first Test.

Earlier, Kemar Roach ran through the lower order of the Bangladesh batting lineup, bagging five for 53, despite 64 from wicketkeeper Nurul Hasan and 63 from captain Shakib Al Hasan, the pair putting on 123 for the seventh wicket.

Alzarri Joseph also picked up a wicket to finish with three for 55 for the home side, who would then go on to lose three early wickets in their chase.

Opener John Campbell and Jermaine Blackwood took the side from three wickets down for nine runs to stumps at 49 without further.

Campbell is unbeaten on 28 and Blackwood 17. Pacer Khaled Ahmed has taken three wickets for 14 runs.