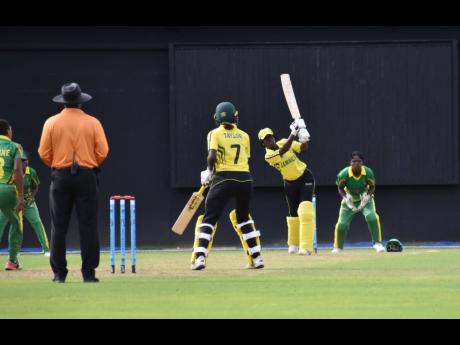 JAMAICA WOMEN’S opening batter Rashada Williams was the standout player as the team booked its place in the semi-final of the CG United Women’s Super50 Cup following their rain-affected eight-wicket victory via the Duckworth Lewis method over the Windward Islands women on Monday.

Williams scored an unbeaten 43 from 69 balls with four fours to help Jamaica chase down the revised 100-run target in 23.2 overs. Captain Stafanie Taylor chipped in with 36 not out from 50 balls with six fours.

Earlier, Taylor bagged three for 22 as the Windwards were restricted to 101 for nine in 33 overs. Off-spinner Vanessa Watts bagged two wickets for 10 runs.

In the meantime, Williams was pleased to once again be among the runs after having a poor World Cup and a sedate start to this year’s regional championship.

“I am feeling extremely awesome to be back in the runs. I have gotten starts but it was just for me to carry on. I applied myself and decided that I wanted to come not out.”

Before the regional tournament, Williams had scored just 19 runs in her last seven international innings, and the right-hander says she is glad that she is reaping some reward for the hard work she has been putting in.

“This is a big confidence booster for me because we have tours coming up so I just want to get my form back because the confidence is here, with confidence and form, I could score much more runs.”

Williams scored 82 runs with a top score of 41 not out in the recently concluded T20 Blaze which Jamaica won, while she has, so far, racked up 72 in two innings in the Super50 Cup.

“I have been doing a lot of throw-downs along with a lot of gym work and running consistently. Hopefully, this will help me to score more big runs and help the team to win the double.”