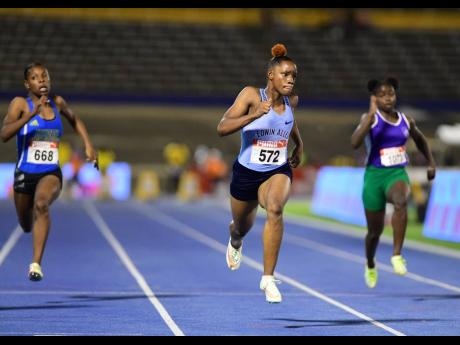 Gladstone Taylor/Multimedia Photo Editor
Tina Clayton (centre) of Edwin Allen High School powers away from her rivals to win the Under-20 girls’ 100 metres in a National Junior record of 10.96 seconds at the JAAA National Senior and Junior Championships at the National Stadium last night.

Clayton, who is the reigning World Under-20 100m champion, sped to 10.96 seconds to win the event. She erased the previous mark of 10.97, which was set by Briana Williams in 2021. Tina Clayton’s Edwin Allen teammate Serena Cole was second in a personal best time of 11.13 while her twin sister Tia placed third in 11.25.

“I never expected to run a sub-11 time at this meet but I am a very hard working and very disciplined person,” said Clayton. This is a massive achievement for me to know that I have run sub-11 to break the National Junior record and so I just want to thank my coach and my teammates for the support,” she said.

Davidson, who was winning the title for the second consecutive time, said he was very delighted with his performance. “ I am very happy that I came out and defended my Under-20 title because I said from the start of the season that I wanted to retain my title and I did that so I am happy,” said the 19-year-old Davidson.

Meanwhile, Camperdown High School’s Roshawn Clarke led from start to finish to overpower his rivals in Under-20 boys’ 400m hurdle. He won in 49.31 seconds. KC’s Antonio Forbes was second in 51.40 while third went to Excelsior High School’s Jahmani Smith in 51.42.

Hydel High School’s Oneika McAnuff captured the girls’ equivalent after she produced a brilliant stretch to nip St Jago High School’s Safhia Hinds to win the event in 58.16. Hinds finished second in 58.23 while third went to Alliah Baker from Hydel in 58.96.