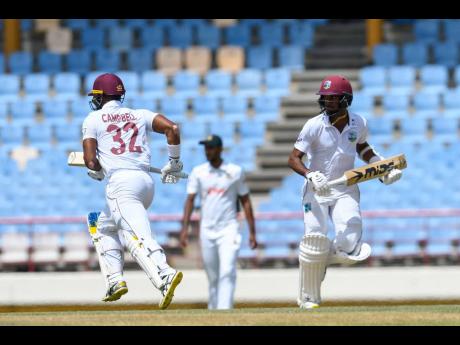 When the players left the field for lunch, the home side were 137 for four, still trailing by 97 runs on first innings with Jermaine Blackwood not out on two and Kyle Mayers, four.

The West Indies resumed the day on 67 without loss with captain Kraigg Brathwaite on 30 and John Campbell on 32. The pair added another 33 runs to post a century opening stand, however Campbell would be the first to go, caught down the leg side by the wicket-keeper off Shoriful Islam for 45.

Left-hander Raymon Reifer then joined his captain, and they added another 31 runs, with Brathwaite bringing up his half century off 103 balls with seven fours.

Soon after getting to the milestone, Brathwaite was bowled by spinner Mehidy Hasan for 51 to leave the host on 131 for two.

The next over, Raymon Reifer would join his captain in the pavilion, playing on to a Khaled Ahmed delivery after getting to 22.

Five balls later, Nkrumah Bonner would suffer the same fate, as his miserable series continued, going for a duck to leave the host in a spot of bother at 132 for four.

Blackwood and Mayers would then see out the remaining overs to take the host to the interval without further loss.