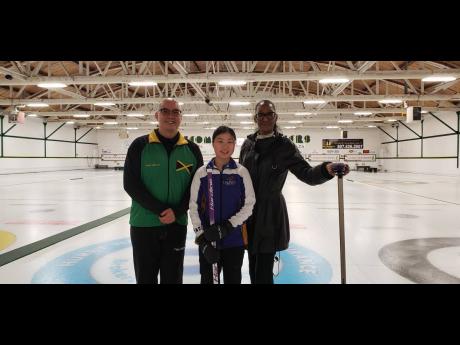 WESTERN BUREAU: HAVING MADE its name in bobsledding and ice hockey, Jamaica has set its sights on fielding a curling team at the 2026 Winter Olympics in Milan, Italy. A team sport played on ice where two teams take turns sliding stones made of...

HAVING MADE its name in bobsledding and ice hockey, Jamaica has set its sights on fielding a curling team at the 2026 Winter Olympics in Milan, Italy.

A team sport played on ice where two teams take turns sliding stones made of granite towards a target known as a house, Jamaica has a team of 12 Canadian-Jamaicans and two American-Jamaicans ready to represent the island.

“It’s almost a done deal. Our application to the World Curling Federation was approved and there was a 30-day period where other national federations could either protest or put up a concern and that period has passed and we have heard no protests,” an optimistic team leader, founder and president, Ben Kong, told The Gleaner.

Kong, who was born in Kingston, said the Jamaica Olympic Association (JOA) is their next stop and that organisation’s president, Christopher Samuda, is hopeful they will make the cut. He has always wanted to expand the Winter Olympics menu and he admits to reaching out to Kong a year or two ago.

“The accrediting association was incorporated by my law office, because of my thrust to ensure that we deepen and broaden the representation in winter sports,” Samuda revealed.

In fact, the team he says will interview with the JOA shortly, and he hopes they will be admitted as members.

The group has a two-week deadline in which to provide final documents to the World Curling Federation so they can enter the World Championships, Samuda confirmed, and the fact they have almost cleared all the prerequisites in relation to competencies and expertise is a plus.

But Kong is nervous about how they will be received by Jamaicans here if they are admitted, although every single member of the team was either born in Jamaica or of Jamaican descent.

Anxious to show the world what they can do, in April they competed against the Hong Kong curling team and have been on cloud nine since.

Kong admits that qualifying for the Olympics is no easy feat as the sport is very tough and only the top 12 teams in the world will go to the Games.

“So we have a lot of work to do for this Olympic cycle, and we want to get started. At the very least we can be competitive at the World Championships, that’s where you earn points,” stated Kong.

He is confident in Jamaica’s ability to qualify, because of the speed, power and core strength of the team.

“The core strength and the flexibility is world-class,” added Kong, pointing out that of the people he has trained, the ones who pick up the quickest are dancers, sprinters and martial artists.

A member of the masters’ track and field team in Toronto, Kong says he has taken his teammates, who are sprinters, on the ice.

“Within an hour they are sliding, and pick up the game quicker than I did in six months,” he tells The Gleaner.

He remains astonished by the potential of Jamaicans to accelerate the sport and says there is a very high ceiling because his countrymen can sprint.

Outlining his plans for representation at the Winter Games, the JOA president said that among their strategic objectives was to deepen and broaden the country’s presence.

He argued that the conditions placed on the ice hockey team that state they must have an ice rink before they can represent their country in an Olympic Game have held them back. He has asked for a revision, he says, hoping they will get rid of that conditionality so that Jamaica can be eligible to participate in the Winter Games.

The country has a very strong hockey team in Florida.

“We want to be able, in the future, to roll out a team at the winter Games that is comparable to our summer Games. So we’re looking at curling. We’re looking at other sports as well. For instance, figure skating, snowboarding,” said Samuda.