US U19 women outclass Jamaica in Rising Stars opener 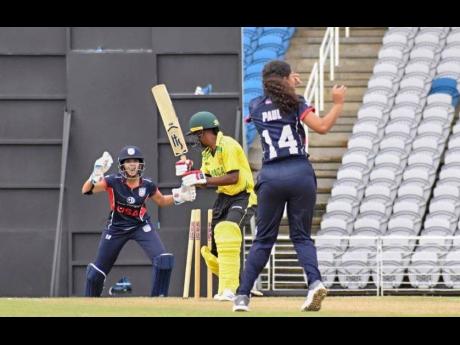 JAMAICA’S UNDER-19 women were no match for a well-oiled United States, who came away with a comprehensive seven-wicket win in the opening match of the 2022 Cricket West Indies Rising Stars T20 tournament at the Brian Lara Cricket Academy (BLCA) in Trinidad & Tobago yesterday.

Asked to take the first strike on a damp BLCA surface, the Jamaicans were restricted to a mere 49 for five in their allotted 20 overs, with Gabrielle Bryan being the only batter to get to double figures following her 12 not out.

Number three batter Breanna Gordon got eight runs from 27 balls before she was run out by Snigdha Paul, who also claimed the opening wicket of Tasha Gaye Gordon for a second-ball duck.

In reply, the Shivnarine Chanderpaul-coached USA lost a couple of wickets, as Kate Wilmott bowled Disha Dhinga for four, having done the same to Tyra Gonsalves for one to leave the USA on 23 for two.

Brianna Plummer then had Laasya Mullapudi caught for eight to leave the Americans on 42 for three; however, Anika Kola,n with 11 not out and Isani Vaghela, nine not out, saw the USA to victory at 53 for three in 11.2 overs.

Coach of the Jamaica team, Carl Brisset,t said nerves got the better of most of the young ladies who were getting their first taste of action at that level.

“Only four of our girls had played at this level before and the rest were playing their first competitive cricket match ever. Junior Bennett and I went around the island before the tournament and recruited the best talent on the island, and so most of them never played in a competitive match before, but come the next game I believe we will fare better.”

The young Jamaicans will next face off with Guyana on Friday at the same venue.

Guyana opened their campaign with a nine-wicket win over Barbados at the Diego Martin Sports Complex.

Guyana scored 63 for one after restricting Barbados to 62 for three from their 20 overs.