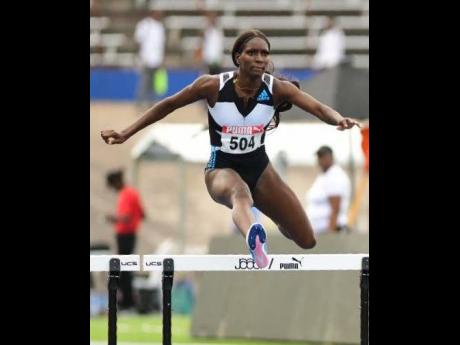 “Coming off the fourth place last year, I made a vow to myself to never lose a championship that close again so I was practising and working very hard and harder than last year and fortunately, I placed second,” she said last Thursday.

Based in Texas and coached by 1996 Olympic bronze medallist Tonja Buford-Bailey, Salmon wasn’t completely surprised by her speed in Kingston.

“My coach told me that I had been practising at a 53 seconds pace steadily, consistently so I knew it was only a matter of time that it would come.”

A bout of COVID-19 threw a spanner into the works.

“Nobody knew but I had COVID probably like two weeks prior to the Trials. I was out of practice, struggling to get back to like a fraction of my best self and with God’s help, I was able to pull it off and I’m just extremely grateful,” the relieved 23-year-old sighed.

At the last World Championships, she made the semi-finals and now she has set her sights higher.

“My aim at this point is to just to make the final because once you make the final, any card can play,” she reasoned. “So I’m just striving to do better than I did in Doha 2019. I actually think I’m on pace to do just that,” the former Hydel High School team captain said.

Before the 400m hurdles heats commence in the US city of Eugene on July 19, Salmon and Buford-Bailey will be fine-tuning her race rhythm.

“The 400m hurdles has to do with stride rhythm and stride pattern and I tend to lose my rhythm sometimes,” she confessed.

“In the final at Trials, I realised that I hopped off the 15 stride pattern and was going 14. So I’m guessing because I’m getting much faster, it’s much easier to go 14 but I don’t need to go 14 to be in the race. So we’ve been discussing that and we’ve been talking about saving as much energy as I can in the first half to be able to run home strong,” she said.

As things stand, her run of 53.82 seconds at the Nationals makes her the sixth-fastest woman this year.