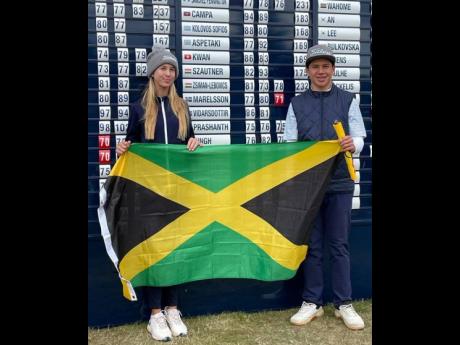 Jamaica’s junior golfers, Ryan Lue and Mattea Issa, finished in 59th and 75th place, respectively as the curtains came down on the three-day Royal and Ancient (R&A) Junior Open, which was held at the Monifieth golf links in Scotland.

Lue had rounds of 75, 87 and then another 75 on Wednesday’s final day to finish with a 21 over par 237 to be in a four-way tie for 59th place with Bermuda’s Oliver Betschart, Singapore’s Xington Chen and Denmark’s Julie Frederiksen.

Issa, who was nine shots back from her compatriot Lue, finished with rounds of 80, 80, and 86 for a 30-over par total of 246 in a three-way tie for 70th position with Bulgaria’s Victoria Georgieva and Singapore’s Sean Pang.

The Jamaican pair was among 110 junior golfers from around the world that took part in the 54-hole event, and manager Alison Reid, who spearheads the junior golf programme in Jamaica, said the experience gained from the championship will do a world of good for the upcoming youngsters.

“I am proud of what Ryan and Mattea have done, and more importantly, proud that junior golf in Jamaica is at a level where we had two children that we could have sent to the event. Many nations could only send one, so I think this is something as a country we can be proud of.”

The pair’s performance follows that of Jamaica’s Emily Mayne and Samantha Azan, who claimed their respective Under-18 and Under-15 titles at the recent Caribbean Junior Championships, which was held in Puerto Rico.

Fifteen-year-old Connor Graham from Scotland secured the overall title after recording a bogey-free five-under-par final round 67 to finish on 203, 13-under-par, to defeat heavily fancied Thai player Ratchanon Chantananuwat by five shots. Eric Zhao from Canada was third on four-under, with Riura Matsui from Japan in the fourth spot on two-under.