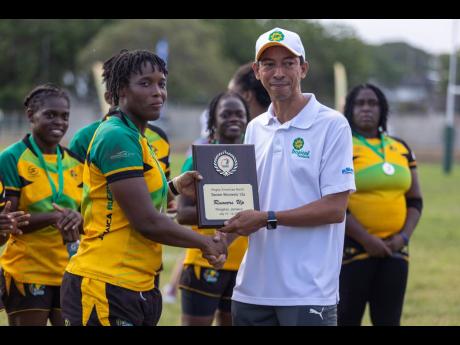 After four days of intense competition among the six competing nations, USA South first secured the female title following a close 17-14 victory over the Jamaica team on Saturday.

The American side racked up three tries, compared to two tries from the Jamaican side to seal the title.

The Jamaicans advanced to the semi-final following first-round victories over Trinidad and Tobago (T&T) and the Dominican Republic. They then got by St Lucia 43-0 to advance to the final. For the USA South team, they took care of St Lucia and the Cayman Islands before defeating T&T 25-5 in the semi-finals.

Jamaica’s women’s head coach Hughton Campbell was pleased with the team’s performance, despite not claiming the title on home soil.

“I thought our performance was fantastic. These ladies put everything on the line and they were an exceptional bunch. Maybe, if we had another 10 minutes in the game, we could have taken it,” Campbell said.

USA South coach Chris Martin was elated that his team was able to get over the hurdle and take the title after missing out back in 2019.

“I am very proud of the girls because the last time we won gold was back in 2018, and then fell off in 2019. It’s been three years of hard work and I am just happy for them,” Martin said.

Earlier, T&T secured the bronze medal following a 25-12 win over the Cayman Islands.

Meanwhile, in the Under-19 final, the USA South team demolished their Jamaican counterparts 56-10 following an impressive nine tries by the Americans, with the Jamaicans managing to score just a single try in the entire match.

It was the second win for the USA side over the Jamaicans following the opening day 21- 7 victory.

Losing coach Phil Davis had nothing but praise for his Jamaican side, which only came together just days before the start of the tournament.

“Overall, the tournament has been amazing. These boys who have come from the United Kingdom, United States and here in Jamaica only met each other seven days ago, and this is the start of something special. It is disappointing losing in the manner which we lost, but we played well throughout the tournament,” said Davis.

USA South coach Mark Williams was pleased that rugby was able to get going once again following the pandemic, and he was overjoyed at how his team responded to the title chase.

“What we focused on was getting better at every practice, and we decided that, every time we got together, we wanted improvement, and that is what we saw in the final,” he said.

The bronze medal was secured by Mexico following a 34-0 win over Bermuda.