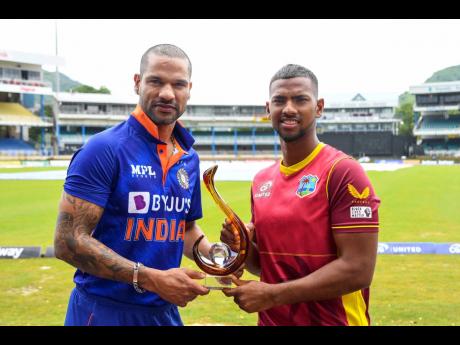 All eyes will be on the Nicholas Pooran-led West Indies team when they take on India in the first of three One day Internationals (ODIs) starting today at 8:30 a.m. Jamaica time in Port-of-Spain, Trinidad and Tobago.

After coming off a poor performance against Bangladesh in Guyana where the regional side lost all three matches, Pooran and coach Phil Simmons are almost guaranteeing a better display from the hosts, with a better batting surface at the Queen’s Park Oval at their disposal.

Statistics are certainly not in favour of the home side who have lost six ODIs on the trot, and to make matters worse, they have not beaten India in a bilateral series since 2006.

If there is any hope to cling on to for the men in maroon, these matches will not count for any points towards the World Cup Super League, and there is also the fact that India travelled with a second-string side tat will be led by opener Shikhar Dhawan.

For Pooran, the disappointment of the Bangladesh series has prompted the players to do a lot of introspection, and the aim is to show the fight against the more formidable Indian side.

“For me, I want to see the guys continue to fight with both bat and ball. For this India series, I want us to dig deep and just fight as long as possible, and you never know, things might just happen for us,” said Pooran.

The fight that Pooran is alluding to is batting the full complement of overs, which the West Indies have not managed to do in their last 12 ODIs.

With the inclement weather hampering the team’s preparations, Pooran believes the side will show their true mettle once conditions are right.

With no Virat Kohli, K.L. Rahul, Rishabh Pant, and Jasprit Bumrah to call on, captain Dhawan is positive that the fringe players such as Shreyas Iyer, Deepak Hooda, and Sanju Samson can get the job done and continue their winning ways as they did in England recently.

“I am a very positive person and positivity is all about self-belief and confidence. I have been around for many years, and that is why I am here. I want to create energy for the youngsters in the team that will allow us to perform to our best, and when we do that, the results will take care of themselves,” Dhawan said.