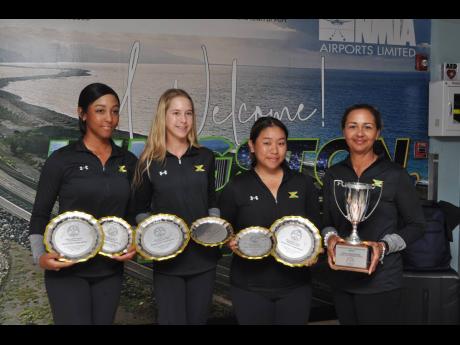 JAMAICA GOLF Association (JGA) President Jodi Munn Barrow said she could hardly contain her excitement and had to hold her nerve on the final day as her young female team copped the George Teale Trophy at the 65th Caribbean Amateur Golf Championship held in the Turks and Caicos Islands.

Munn Barrow, who in the past would have contributed as a player to five of Jamaica’s previous titles, said she could not be prouder, as Jamaica outlasted favourites Puerto Rico to win by 12 shots overall following a three-round total of 34 over par 366.

The female team, captained by Emily Mayne and featuring rookies Cameron Marsh, Winnie Lau and Mattea Issa, all contributed valuable points over the three days to secure Jamaica’s hold on the trophy for the first time since 2006.

“I am ecstatic for our young ladies because for most of the day, watching the scoring, I was nervous until I realised that we were coming out victorious. It is an honour to lead such a great group of golfers and I am very happy with the outcome,” said Munn Barrow

For Munn Barrow, the success of the nation’s junior programme has already begun to bear fruit with the young ladies stepping up to the senior rankings to secure silverware.

Three of the four Jamaican golfers finished in the top 10 in the individual standings with March and Mayne finishing fourth and fifth, respectively, while 15-year-old Mattea Issa finished seventh.

In the meantime, Jamaica’s men ended the championship in fourth place, two places down from their second-place finish last year.

The top four men in the third and final round were Justin Burrowes, William Knibbs, Rocco Lopez and Owen Samuda. They posted a combined score of 31 over par 895 which was 35 strokes behind winners Puerto Rico.