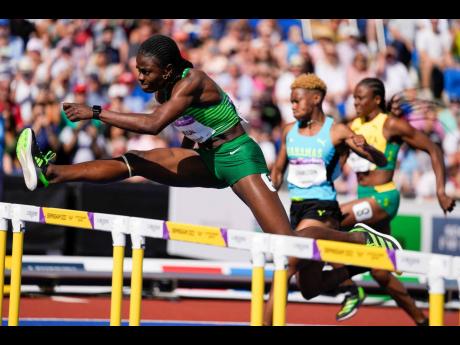 AP photo
Tobi Amusan of Nigeria competes in the women’s 100 metres hurdles final inside the Alexander Stadium at the Commonwealth Games in Birmingham, England on Sunday.

BY THE time Nigeria’s Tobi Amusan settled into the blocks for her 2022 World Championships 100-metre hurdles semi-final in Eugene, Oregon, seven women had combined to produce 15 times under 12.30 seconds.

Amusan tore up the history books with a world record 12.12 seconds and later won the final with a wind-assisted time of 12.06 seconds. Her performances leave just one question – Is sub-12 possible?

“Of course. Yes,” he answered days after the Worlds.

In a reference to the world 400-metre record by South African Wayde van Niekerk in the 2016 Olympics, Boldon cautioned, “I’m not saying you’re going to see it tomorrow. When Wayde van Niekerk ran the 43.03, people went, ‘Oh, that record’s going under 43’. I said, hold on. I said he was in an outside lane with the fear of God in him because he had Kirani James and Lashawn Merritt on the inside. I said that’s a perfect storm situation and you may not see that (again). Six years later, nobody’s really threatened 43.03.”

Amusan outran Jamaican Britany Anderson for the gold medal in the final with Anderson taking Danielle Williams’ national record from 12.32 to 12.31 seconds in the semi-final.

“I think she can do it,” Boldon theorised. “I just watched her run 12 flat. I know that’s the fastest surface in the world, but we just saw her run 12.06 with a 2.5 wind. It’s not like she had a 3.0, a 3.9 so I’d have to be a fool to say that we’re not going to see 11. I’m just maybe a little bit more conservative in that, it’s not necessarily going to happen this year and it’s not necessarily going to be Amusan,” he calculated.

“Maybe it’s going to be the Jamaican,” he guessed.

Boldon senses the mood the athletes are in.

“Sometimes somebody cracks open the door and everybody runs through it,” he said philosophically.

Grant Holloway missed the men’s 110-metre hurdles record by 0.01 at the US Trials where he zoomed his semi-final in 12.81 seconds. In the 400-metre hurdles, the records have been battered. At the Olympics, Norwegian Karsten Warholm blitzed a revolutionary winning time of 45.94 seconds. Among the women, American Sydney McLaughlin has taken over with four world records, culminating with an amazing 50.68 seconds in the World Championship final last month.