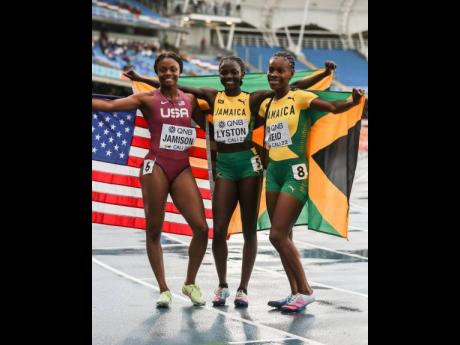 HEAD COACH of Hydel High School’s girls’ track and field team, Corey Bennett, is still on cloud nine following the performances of his charges at the World Under-20 Championships in Cali, Colombia.

One of those performances was particularly pleasing to the coach, who was also part of Jamaica’s coaching unit at the Championships.

Brianna Lyston and Alana Reid picked up gold and bronze in the women’s 200 metres, with the former clocking 22.65 seconds for the win and Reid, a personal best 22.95 for third.

“I am extremely happy for Brianna’s win as there were a few concerns coming into the Championships. It has been a long season for her as after competing last year in Nairobi, she only had a short break and to run another sub-23 seconds after doing so in the semi-finals, I am proud,” said Bennett.

According to the coach, Lyston was in peak form in June but a slight injury slowed her progress.

“Even during the training camp and coming here in Cali, I had to back her off of training completely.”

Lyston, who finished fourth in the event in Nairobi, but was disqualified, has been unbeaten in the event all season.

“Brianna is a very special talent and a coach’s dream to work with. She needs good individual attention. She is like a daughter to me and I hope when she moves on to university she gets the same treatment. She is indeed an inspiration to all the other Hydel girls as they do look up to her and she is always encouraging them. The sky is the limit for her,” said Bennett.

“Special performance from Alana running blind out of lane eight and clocking sub-23 seconds for the first time in those conditions was really a good achievement,” said Bennett.

“Alana really loves the 200 metres. She has a great future in the event,” he said.

According to Bennett, the relative size of Hydel’s track team has had some hidden advantages.

“We do not have the resources to prepare a team to win Championship titles, so spending more time individually with the girls has resulted in their good performances at the international level and this will not change.”