Shelly versus Shericka moves to Monaco 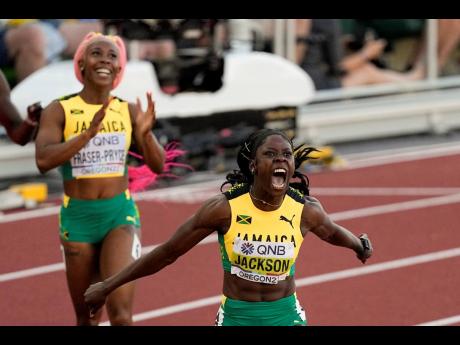 AP
Jamaica’s Shericka Jackson (right) roars after winning the women’s 200 metres ahead of an impressed Shelly-Ann Fraser-Pryce at the World Athletics Championships on Thursday, July 21, 2022, in Eugene, Oregon.

FOUR DAYS after running the world’s leading time in the 100 metres at the Istvan Gyulai Memorial meet in Hungary, Jamaica’s Shelly-Ann Fraser-Pryce, the World champion in the event, will face compatriot Shericka Jackson, the World 200 metres champion, at the Monaco Diamond League meet in France this afternoon

The two women scored impressive wins in Hungary. Fraser-Pryce won the 100m in 10.66 seconds to lower her world leading time by one-hundredth of a second. Jackson won the 200 metres in 22.02.

Jackson, who will be racing in Monaco for the first time, said yesterday that facing Fraser-Pryce in the shorter event will always spur her on.

“I love competing with Shelly. She brings out the best of me, when we are competing in the 100m,” the 2022 World 100m silver medallist said at yesterday’s pre-event press conference. “She always brings her ‘A’ game. I’m looking for super exciting times tomorrow.”

Ten other Jamaicans are down to compete at the meet.

Two Jamaican women, Commonwealth Games champion Janieve Russell and Rushell Clayton, will run in the 400m hurdles. Russell and Clayton have identical season’s best times, 53.63, the fastest in the field, and could hand Jamaica the top two places in the event.

Former world champion Tajay Gayle, who was not at his best at the recent World Championships, will try get his season back on track when he competes in the long jump.