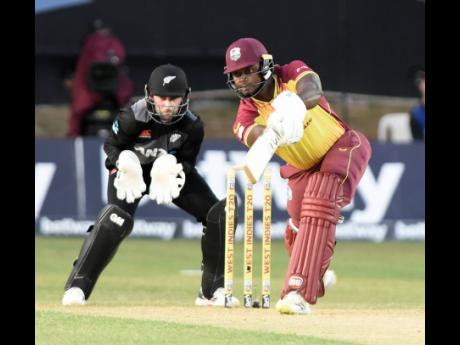 Ian Allen
West Indies allrounder Romario Shepherd (right) plays one of his many lusty blows on his way to 31 from 16 balls during the first T20 International of a three-match series against New Zealand at Sabina Park. Looking on is New Zealand wicketkeeper Devon Conway.

IT WAS a case where the West Indies left it a little too late, for in the end, the regional side succumbed to New Zealand by 13 runs in the opening T20 International of a three-match series at Sabina Park.

Chasing a formidable 186 runs to win, the home side could only manage to get to 172 for seven despite a record quickfire unbroken eighth-wicket half-century partnership towards the back end from Romario Shepherd and Odean Smith.

The West Indies finishing positively with the bat, but they certainly didn’t start brightly with the ball after the Kiwis jumped on the opportunity to put a big score on the board.

The West Indies had to wait until the eighth over to get the breakthrough as Smith sent back Guptill for 16, thanks to a superhuman catch on the boundary from Shimron Hetmyer.

The very next ball, Smith was back among the wickets. This time, wicket-keeper Devon Thomas came up with an acrobatic take to send Conway back to the pavilion for 43 off just 29 balls.

Captain Kane Williamson, playing his first international game for some time, came in and played a mature innings, despite a stoppage for rain. His knock helped to set things up for the visitors, the right-hander making 47 from 33 balls with four fours and two sixes, which helped to lay the platform for Jimmy Neesham to put the finishing touches on the innings.

At 149 for five in the 18th over, Neesham took command, as the New Zealanders took 34 runs off the last two overs with Jason Holder conceding 23 in the final six deliveries.

Neesham finished unbeaten on 33 from just 15 balls with three fours and two sixes as Smith ended with career-best figures of three wickets for 32 runs from his four overs.

Faced with an imposing 186 to chase, makeshift opener Shamarh Brooks looked intent to get things going with a couple of early boundaries to hand the home side a bright start with 14 runs in the first two overs.

However, it would not take Tim Southee long to get in on the act, sending Brooks’ opening partner, Kyle Mayers, back for just one run.

Captain Nicholas Pooran also looked purposeful when he came to the crease, striking two fours and a six in his eight-ball knock of 15.

Left-arm spinner Mitchell Santner would pick up the first of his three wickets when he sent back Pooran, pulling a short delivery into the deep to give a simple catch.

The regional side would lose further wickets, including Brooks, who had gotten to 42 from 43 balls with two fours and three sixes.

Jason Holder and Rovman Powell played cameo knocks of 25 and 18 runs, respectively, but when they fell, the writing was on the wall for the hosts, who needed 72 runs off the last four overs.

Shepherd and Smith ignited the crowd with some late-order hitting, the two striking up a 58-run unbeaten partnership to bring the home side within touching distance, however, it was too little, too late and the Windies fell short by 13 runs to go one-nil down in the three-match series.

Shepherd finished unbeaten on 31 from 16 balls with one four and three sixes, while Smith ended not out on 27 from 12 balls with four fours and a six.