NACAC good for young athletes – May

Team leader points to importance for those new to international arena 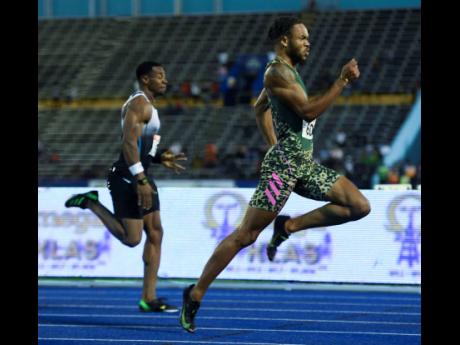 Ricardo Makyn
Andrew Hudson (right), seen here on his way to winning the national 200-metre title will be debuting for Jamaica at the Nacac Senior Championships in Freeport, Barbados. Also pictured is Yohan Blake.

FOR ATHLETES who aspire to success in athletics, the NACAC Senior Championships is an important step. That’s the advice from Dennis May, team leader of the 37-member Jamaica team to this week’s staging of the meet in Freeport, Bahamas.

“NACAC, for me, is an important step”, May posited.

“For me, things like CAC, NACAC, Pan-American, Commonwealth, World Championships, Olympics, these are the steps that, after you become a senior and leave Carifta, these are the steps you make, and some athletes don’t understand the importance of this, what I call, continuous improvement through a series of meets,” May reasoned.

Staged by the North American Central American and Caribbean (NACAC) Athletics Federation, the event is where athletes can earn cash.

In addition, the first and second-place finishers in the relays will qualify for next year’s Pan-American Games in Chile.

The NACAC team includes 200-metre national champion Andrew Hudson whose transfer from the United States to Jamaica was incomplete at the time of the World Championships.

“I’m certain that it will be a proud moment for Andrew, having waited so long to represent his country for various reasons, but the point is that he is here now and he’s with the black green and gold,” said May.

May is delighted to have world 200-metre champion Shericka Jackson set to run in the NACAC 100 metres.

“I mainly met her through Neville Myton who was one of the persons who helped to mentor her and I am not surprised at where she is. Neville always told me that she is one of the best 100 to 400 sprinters that Jamaica has ever seen and she will do well because of her mindset,” he said.

Jackson won the silver medal in the 100 at the recent World Championships and lowered her lifetime best to 10.71 seconds in Monaco last week.

The meet will also be a platform for the continued return to fitness for 2019 world long jump champion Tajay Gayle.

“He’s on his way back and I’m certain that he will embrace this competition,” May commented. Gayle leapt to a season’s best of 8.06 metres last week.

This team is smaller than Jamaica’s 42-member 2018 squad but does include newly crowned Commonwealth 110-metre hurdles champion Rasheed Broadbell, whom May described as “a young man with a tremendous amount of potential”, Olympic 100-metre hurdles bronze medallist Megan Tapper, the one-two finishers from the Commonwealth women’s 400-metre hurdles final, Janieve Russell and Shiann Salmon, and Fedrick Dacres and O’Dayne Richards, who won World Championship medals in the 2019 discus and the 2015 shot put, respectively.

In 2018, Jamaica finished second to the United States with seven gold, 10 silver and five bronze medals.