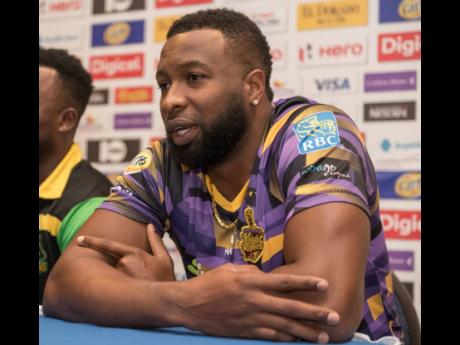 File
TKR captain Kieron Pollard: The way we have played throughout the entire tournament, we deserve to be in the position we are right now.

The no-result saw both teams pick up a single point in what was their final league game and the penultimate one of the group stage overall.

Kings remained second on nine points while Tallawahs also ended on nine but lie third due to an inferior net run rate.

In Saturday night’s late game, Guyana Amazon Warriors roughed up Trinbago Knight Riders (TKR) to storm into the playoffs while condemning the multiple-time champions to their first-ever bottom-place finish.

Asked to bat first at the Guyana National Stadium, Amazon Warriors rallied to 173 for six off their 20 overs with Afghan opener Rahmanullah Gurbaz lashing his second straight half-century with 60 off 42 deliveries.

In reply, TKR’s batting woes continued as they slumped to 136 all out from their allotted overs, finding themselves crippled by Amazon Warriors’ spin trio of left-armer Shakib-al-Hasan (three for 20) and off-break bowler Junior Sinclair (two for 26) and leg-break bowler Imran Tahir (two for 31).

Samit Patel struck 34 and Colin Munro, 30, but no other batsman passed 20, to leave TKR with their sixth defeat in ten games and only seven points to show for their campaign.

They joined reigning champions St Kitts and Nevis Patriots in missing out on the playoff spots.

“The way we have played throughout the entire tournament, we deserve to be in the position we are right now,” said captain Kieron Pollard, who made 13 to end the campaign with 132 runs from nine innings at an average of 14.

“To play ten games and as a batting unit first of all, not cross 160, I think that’s disappointing to say in itself.

“And then from a bowling perspective, having teams on the back foot and giving it away in the back end, we deserve to be where we are in the table.”

For Amazon Warriors, the victory was their third on the bounce lifting them into second on nine points, after they faced elimination at the start of their home phase.

“I would like to say fantastically well done to the boys. They really played hard for the three games that we’ve won so far, and I don’t have enough words to express how great they were,” said skipper Shimron Hetmyer.