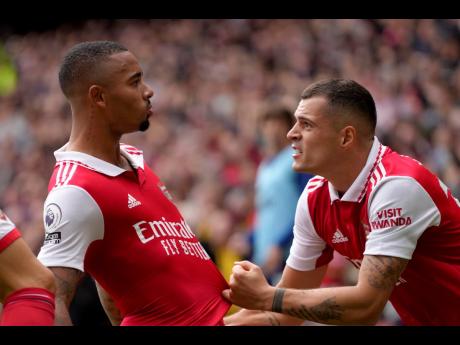 IT’S LOOKING increasingly like Arsenal is the real deal in the English Premier League.

It’s also looking like Liverpool hasn’t got what it takes to mount another title challenge.

Arsenal made it seven wins from eight games to open the season by beating Tottenham 3-1 in the north London derby on Saturday, ensuring Mikel Arteta’s team will stay top for at least another week.

The only defeat for Arsenal came at Manchester United, but that was only after an encouraging and dominant performance for large spells at Old Trafford.

On current form, it looks well within Arsenal’s grasp to finish in the top four and qualify for the Champions League for the first time since 2017.

Getting in the top four might be the extent of Liverpool’s ambitions after a 3-3 home draw against an entertaining Brighton team already moulded in the bold style of its new Italian coach, Roberto De Zerbi.

Leandro Trossard scored twice in the opening 17 minutes and completed his hat-trick in the 83rd at Anfield after Roberto Firmino’s double sparked Liverpool’s fightback.

Liverpool, the 2020 champion and the biggest league rival of dominant Manchester City in recent years, is already 11 points behind Arsenal and has won only two of its first seven games.

Conor Gallagher scored a 90th-minute winner for Chelsea in its 2-1 victory at Crystal Palace, the team where the midfielder spent last season on loan.