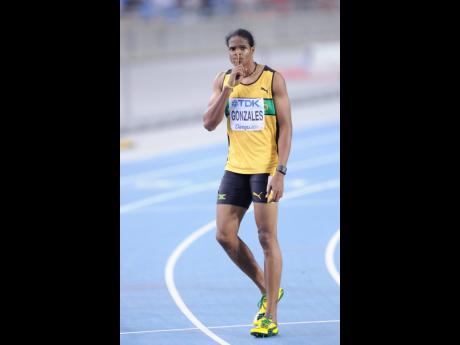 FORMER NATIONAL 400m record holder Jermaine Gonzales is optimistic that his post-track career will be equally, if not, more fruitful than the one he had when donning his spikes. The two-time Commonwealth Games bronze medallist from the 2006...

FORMER NATIONAL 400m record holder Jermaine Gonzales is optimistic that his post-track career will be equally, if not, more fruitful than the one he had when donning his spikes.

“My transition has been going well so far, as I’m coaching now. I’m currently the head coach at Papine High School, so I’m taking a step further into the high school programme, and I’m enjoying every minute of it,” said the 37-year-old Gonzales.

The Former Tacius Golding standout, who brings a wealth of experience with him, believes sharing his knowledge with his new group of athletes can bear fruit in the near future, especially for Papine High School, who fell short of registering a point at the 2022 ISSA/GraceKennedy Boys and Girls’ Athletics Championships.

“I’m happy to give back to a school that has done so much for me and so far, it’s going well. I’m enjoying retirement and I’m looking forward to sharing my knowledge with some of the younger guys and keep on supporting the present athletes and hopefully, they can continue to do well.

“A lot of them (Papine High School athletes) are new to the sport. We just went through COVID and it’s been about two and a half years since most of them did any form of training. There’s talent there and I’m trying to let them understand what it takes for them to become an athlete, hopefully they will listen, train hard and then you’ll see talent coming from Papine High School,” said Gonzales.

Prior to the start of track season, Gonzales will have the small matter of helping Sts Peter and Paul Preparatory School, where he’s the assistant coach, to lift the 2022 Under-11 Junior Cup. The team currently sits in third position on nine points in Zone 2, behind leaders St Francis primary (10 points) and Belair Preparatory in second (nine) and will take aim at correcting their wrongs for the semifinal stage which kicks off on October 15.

“It’s the first time these guys are out playing in a competition like this, and they did well. They played four games, won three and lost one, so we’re happy about that. We played a bit timidly, but I’m sure this did a lot for them, and with the next competition (ISSA Prep School competition) they will be more prepared to come out and take on the challenge,” Gonzales concluded.