Ackeem Blake takes on famous mantra in a bid for greatness 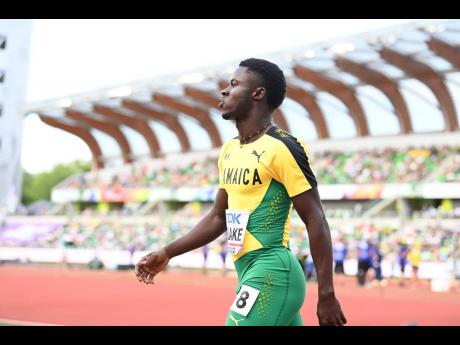 Blake epitomised this philosophy, when he showed he was ready to compete with the ‘big boys’ of the sport, by adding his name to the growing list of Jamaican athletes to run sub-10 seconds over 100 metres.

He did this on multiple occasions in the 2022 season, including a 9.93-second personal best at the JAAA National Senior Championships to secure third place and 9.98 to claim his first senior title at the NACAC Championships.

“I felt like NACAC was a great opportunity for me to gain valuable senior championship experience, and I also felt like the victory was within reach. It’s my proudest moment in athletics so far,” he said.

Blake said this hunger for success was instilled in him since his days at the Merlene Ottey High School when Trevaughn Marsh was his coach.

“In high school my coach always says ‘Ackeem, you must be hungry in everything that you are doing.’ I was in training and I felt a little bit comfortable, I said to myself ‘no this is not me’. I remember my coach…so I am always hungry for it,” the sprinter said.

The Titans Track Club athlete said while he is hungry to achieve more than what he already has, he has to take a careful approach, so he doesn’t “choke on his food”.

“I am not going to pressure myself. I am young (and) there is more room for improvement so I am just taking it step by step and I know I will do great,” the 20-year-old sprinter said.

“Yes, I would like to go to the World Championships, medal and get a faster personal best but as I said, I am taking it step by step, I am not rushing it.”

After clocking his performance at the National Senior Championships, some track and field analysts predicted that Blake would make it to the World Championships final, but the young man faltered after suffering discomfort during his semifinal.

He said that issue is now behind him and he is working towards improving himself.

“I had a minor injury after the Jamaica National Senior Trials. I have fully recovered. My issue at the Wold Championships was the food. I could not find a decent plate of food to eat for days. In some instances, the food from my dormitory was served partially raw and cold. A few other Jamaican athletes spoke about this issue as well. By the time my team was able to import food to me, it was too late. As you know, food is our primary source of energy,” Blake said.

“This too was a learning experience for me, and we will have contingency plans in place for future travels.”

But Blake said his time will come

“Every professional sprinter wants to be a World Champion and an Olympic Champion, what else are we competing for? Redemption is surely on my mind and in my heart, but all I can do is prepare myself and then leave everything on the track. If all goes well throughout my season of training, then anything is possible,” Blake said.

However, to get where he wants to be, the athlete said he has to remember where he is coming from, while being aware of the present.

“I remember where I am coming from and I just want to make my dad happy. I also draw inspiration from God, my coaches, my teammates, my management, and my dad,” the athlete from the Gregory Little-lead track club said.

He said to see himself coming from a non-traditional high school and competing against the world’s best track athletes at global events is already a great accomplishment for him.

“I feel really great about this because in my high school I was outgrowing that school because I never had certain equipment. My coach (Trevaughn Marsh) left Merlene Ottey and left me there. He wanted me to come with him but I said ‘no.’ To be a professional athlete right now it is really rough because certain things you can do in high school (but) at the professional level you cannot do that,” Blake said.

According to Blake, his journey has just begun and the world should should look out for him.

“I have a strong desire to be a champion, and remain a champion,” Blake said.

“I am just understanding the art of sprinting and the world of professional competition. I am not going to put any pressure on myself and make any predictions, but I do expect to be a better athlete next season.”