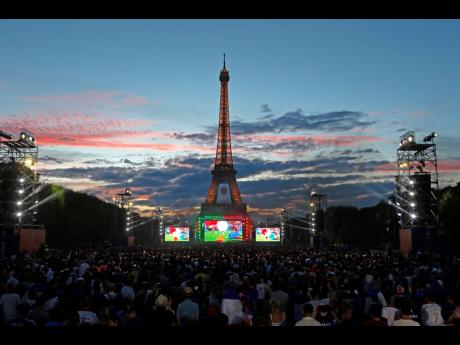 AP
Supporters watch on giant screens the Euro 2016 final football match between Portugal and France in the Paris fan zone, France, Sunday, July 10, 2016. Paris has decided not to display the matches of the World Cup in Qatar on giant screens in fan zones amid concerns over rights violations of migrant workers and the environmental impact of the tournament that have led some other French cities to make the same decision.

Paris will not broadcast World Cup matches on giant screens in public fan zones amid concerns over rights violations of migrant workers and the environmental impact of the tournament in Qatar.

It follows similar moves by other French cities, despite France going in as the defending champion. Some other European teams or federations are also looking at ways to protest.

Pierre Rabadan, deputy mayor of Paris in charge of sports, told reporters in the French capital that the decision against public broadcasting of matches is due to “the conditions of the organisation of this World Cup, both on the environmental and social level”.

He said in an interview with France Blue Paris that “air-conditioned stadiums” and the “conditions in which these facilities have been built are to be questioned”.

Rabadan stressed that Paris is not boycotting the football tournament, but explained that Qatar’s “model of staging big events goes against what (Paris, the host of the 2024 Olympics) wants to organise”.

The move comes despite the city’s football club, Paris Saint-Germain, being owned by Qatar Sports Investments.

“We have very constructive relations with the club and its entourage yet it doesn’t prevent us to say when we disagree,” Rabadan said.

Denmark is staging its own protest: Its team jerseys at the World Cup will include a black option to honour migrant workers who died during construction work for the tournament. And several European football federations want their captains to wear an armband with a rainbow heart design during World Cup games to campaign against discrimination.

The mayor of Strasbourg, the seat of the European Parliament and the European Court of Human Rights, cited allegations of human rights abuses and exploitation of migrant workers in Qatar as the reason for cancelling public broadcasts of the World Cup.

“It’s impossible for us to ignore the many warnings of abuse and exploitation of migrant workers by non-governmental organisations,” Jeanne Barseghian said in a statement. “We cannot condone these abuses, we cannot turn a blind eye when human rights are violated.”

And then, there’s the impact on the environment, Barseghian said.

“While climate change is a palpable reality, with fires and droughts and other disaster, organising a soccer tournament in the desert defies common sense and amounts to an ecological disaster,” she said.

Arnaud Deslandes, a deputy mayor of Lille, said that by cancelling public viewing of matches, the northern city wanted to send a message to FIFA about the irreparable damage of the Qatar tournament to the environment.

“We want to show FIFA that money is not everything,” Deslandes told The Associated Press in an interview.

As for residents’ reactions to the city’s decision, he added: “I have yet to meet a person in Lille who was disappointed by our decision.”

The gas-rich emirate has been fiercely criticised in the past decade for its treatment of migrant workers, mostly from south Asia, who were needed to build tens of billions of dollars’ worth of stadiums, metro lines, roads and hotels.

Qatar has been equally fierce in denying accusations of human rights abuses, and has repeatedly rejected allegations that the safety and health of 30,000 workers who built the World Cup infrastructure have been jeopardised.