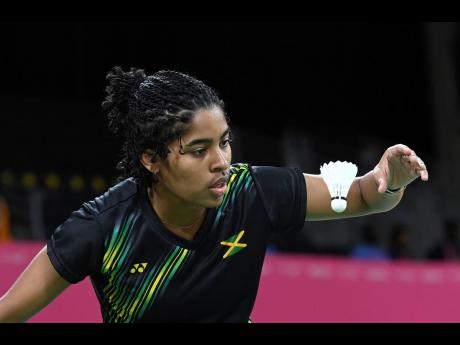 AP
Jamaica’s Tahlia Richardson competes against Zambia’s Elizabeth Chipeleme during the women’s singles badminton match at the Commonwealth Games in Birmingham, England, back in July.

According to the president of the Jamaica Badminton Association (JBA), Wayne Townsend, his organisation opted to stage the higher-graded PanAm Champs instead of the annual Jamaica International Badminton Tournament, which is usually held between February and March.

“What is particularly interesting about this tournament. that urged us to bid for it, it is coming into a period where the thinking at that time was that we are looking at Olympic qualifiers, which will definitely attract a lot of international athletes to the shores to participate.

“It is also a tournament that we get to qualify for the PanAm Championship the following year so they can get qualification points there,” Townsend said in an interview with The Sunday Gleaner.

“So what we did was look at the facility itself, look at what is available to us for this kind of tournament, of this magnitude, and we definitely will be looking at transforming, through the partnership with G.C. Foster, the facility to make it international ready.

“We have an entire list that we were given the requirements that we need to fulfil and ensure that the facilities are prepared to host this kind of tournament,” Townsend said.

According to Townsend, during the walkthrough, rooms were scrutinised for physiotherapy, medical and live streaming, which are important components for the JBA to host the tournament. He singled out live streaming, with a room to be retrofitted to show the entire tournament to the world.

A regional team is expected in Jamaica on December 7 and will also tour G.C. Foster.

“That meeting (December 7) is to allow the regional body to have a better understanding and appreciation of the facility because, in the bidding process, we had to give all the specifics about the facility. That will be a high-level meeting to look at what the facility is, what else we need to do to prepare for that April deadline to host the tournament,” Townsend said.