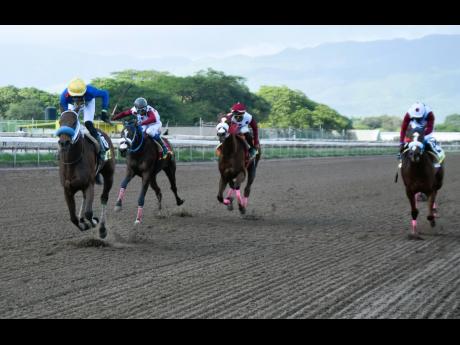 LEGIT BOSS yesterday confirmed the unpredictability of two-year-olds, turning the tables on MAMMA MIA and THALITA in the Pick 3 Super Challenge Trophy, horses who had beaten her in back-to-back races.

Coming off a disappointing fifth-place run behind MAMMA MIA in the Cash Pot Trophy at six furlongs on October 29, 13-1 shot LEGIT BOSS surprisingly raced fifth down the backstretch in the seven-furlong Pick 3.

MAMMA MIA, attempting to win a third consecutive race, led the seven-horse field through an opening quarter of 23.1 with AWESOME ANTHONY tracking the half-mile completed in 46.1.

MAMMA MIA’s stablemate, THALITA, improved into second but LEGIT BOSS, despite running wide into the lane, closed strongest inside to hit the front a half-furlong out with Tevin Foster.

LEGIT BOSS’ earning $1.965 million for Anthony Nunes, a drop in the bucket in his deficit to runaway leader Jason DaCosta atop the trainers’ stakes standings, was one of two winners for the three-time defending champion and Foster.

Nunes and DaCosta teamed up two races later to land the ninth event with NEFERTARI, who was fitted with blinkers and got her first clean break in nine starts.

Though checked three furlongs out in the six-and-a-half furlong event for non-winners of two races, NEFERTARI improved to go third off the turn and ran down even-money favourite, SHE’S FANTASTIC, who she swept past a half-furlong out.

Racing continues on Saturday with the US$125,000 Mouttet Mile being the feature, pitting five-year-old MAHOGANY against super filly ATOMICA, winner of the Jamaica Derby and recent Jamaica Cup.