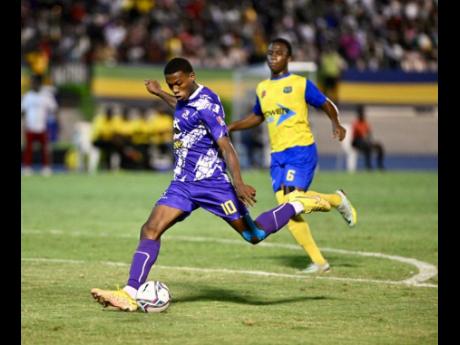 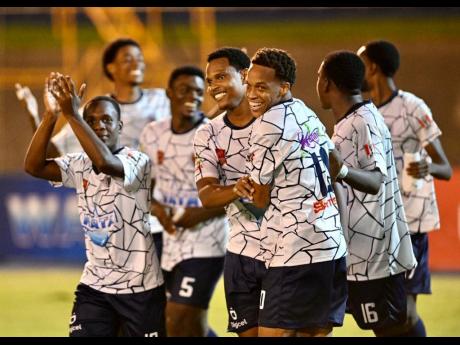 Ricardo Makyn
Jamaica College players celebrate after a penalty shoot-out win over St Andrew Technical High School in the semi-final of the ISSA/Wata Champions Cup inside the National Stadium yesterday.
1
2

THE NAME ‘Whispering Death’ may have been made famous by West Indies fast-bowling legend Michael Holding but last night Kingston College’s (KC), Dujuan ‘Whisper’ Richards made it clear being quiet is as dangerous as anything you can imagine.

Richards, in front of a National Stadium crowd, netted four times, solely carrying Kingston College into the final of the ISSA/Wata Champions Cup after his KC beat Clarendon College 4-2 in the competition’s semi-final.

Richards scored in the 13th, 23rd, 51st and 58th minutes of play, blunting the Clarendon opposition with mazy runs and thoughtful strikes.

Clarendon College did show some of their class, scoring two sublime goals, one from Keheim Dixon in the 64th minute and another from Daniel Clarke in the 77th.

The result meant KC will face Jamaica College, who had to depend on penalties in the other semi-final at the National Stadium to get by a tough St Andrew Technical High School (STATHS).

The second meeting of their expected trilogy in this schoolboy football season ended with the Dark Blues outlasting STATHS 5-4 on penalties.

In what was a preview of Friday’s Manning Cup final, the sides were held to a 1-1 draw in regulation time as JC’s Alec Benny scored first in the 26th minute before Andre Salmon equalised on the stroke of halftime. The control that STATHS had in the first half was equalled by JC in the second, but as if the two mirrored each other, multiple chances of finding a winner in normal time went abegging.

Similar to the Manning Cup finals of 2017 and 2019, STATHS could not hold their nerve in the shootout as Alexavier Gooden’s second-round effort hit the crossbar and cannoned out. It would prove vital in the end as Tarick Ximines scored with the final attempt for a perfect JC to make their way to the finals.

Head coach Davion Ferguson rang in the changes after what he called an exhausting Manning Cup semi-final win against Mona on Tuesday.

“The last game mentally and physically was taxing. So we rotated the squad a bit. The plan was always to give the rest of the players 30 minutes. In the second half we should have won the game. We created four or five clear-cut chances. Faulty finishing by us, but excellent goalkeeping by their goalkeeper, Jaheem Williams,” said Ferguson.

“Once you get to penalties it’s always a lottery and the players managed to hold their nerve,” he said.

The irony of losing yet another penalty shootout to JC has not been lost on STATHS head coach Philip Williams who was pleased with the attacking effort his team displayed. But he hopes that come next Friday, he is not in the same situation of needing a shootout to win.

“It has been an occurrence that we are getting tired of now. Over the 90 minutes I think my guys put on a good show. They came up against a good, deep JC team in terms of talent pool. You saw the changes that they made. For my guys to keep up with them and also display good football, I must give them a lot of praise for doing that,” Williams said.