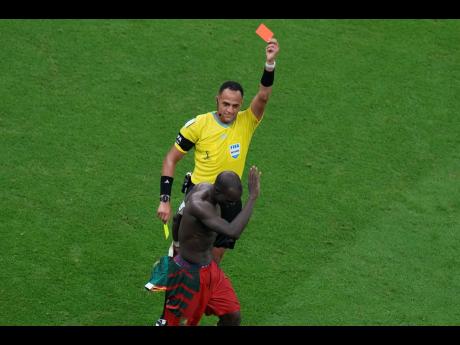 AP
Cameroon’s Vincent Aboubakar is shown a red card for taking off his jersey after scoring his side’s winning goal against Brazil during the World Cup Group G match in Lusail, Qatar, yesterday.

Jerome Ngom Mbekeli, the only member of Cameroon’s team who plays for a Cameroonian club, made an inspiring run and cross to set up Vincent Aboubakar’s header and stoppage-time winner in a 1-0 victory to make the Indomitable Lions the first African nation to beat Brazil at a World Cup.

Despite the victory on Friday, Cameroon finished third in their group and were eliminated.

The 24-year-old Ngom Mbekeli was Cameroon’s final substitution, coming on four minutes from time. Song credited his own former coach, Henri Michel, for giving him an opportunity in 1994 when he played for local club Tonnerre Yaoundé as he was making his World Cup debut.

“You need to trust youth,” Song said through a translator. “Henri Michel gave me an opportunity. He saw the potential in me. Now I’m the coach and I see potential in my young players.

“I knew (Ngom Mbekeli) was a good, quality player. He just needed an opportunity to show that. Hopefully his performance can motivate other local players.”

Goalkeeper Devis Epassy – thrust into action after usual starter Andre Onana was sent home for disciplinary reasons after a dispute with Song before Cameroon’s previous game – earned player of the match honours for a series of difficult saves.

“No one knew me – even in Cameroon – until I started playing for the national team a year ago,” Epassy said through a translator. “We can be proud of what we’ve done tonight. We showed that we can also be a top team.”

Both Epassy and Aboubakar play for clubs in Saudi Arabia.

With eight goals in seven games, the 22-year-old Aboubakar was the top scorer at the African Cup of Nations in January.

Song and Samuel Eto’o, Cameroon’s soccer federation president, are instilling a strict discipline policy modelled after the European clubs that they once played for – Song as a reliable defender and Eto’o as a standout striker.

“That’s where we let ourselves down in the past,” Song said. “Perhaps we didn’t do everything right, so we’re focusing on discipline.

“The team always needs to take precedence over individuals. When you play for the national team, you need to do what’s expected of you.”

While Brazil had already advanced and used mostly reserves, Cameroon still became the first team to beat the five-time champions in the World Cup group stage since Norway did it at the 1998 tournament in France – ending an unbeaten run of 17 group matches.

“We realise now that we could have done better,” Song said. “But we’re a young team and today we’ve seen a young team getting stronger and stronger, and they should be congratulated on their performance.”