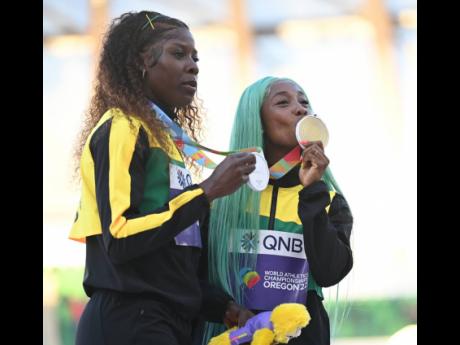 File
Shericka Jackson (left) and Shelly-Ann Fraser-Pryce with their 100m medals at the 2022 World Athletics Championships in Eugene, Oregon.

They compete against each other and are from different training camps, but multiple World Championships and Olympic medallists Shericka Jackson and Shelly-Ann Fraser-Pryce are often seen celebrating together at global track and field meets.

And this time it is no different.

Although Jackson, the fastest woman alive over 200 metres, and five-time 100m World Champion Fraser-Pryce were both nominated for the IAAF Women’s World Athlete of the Year, only Fraser-Pryce was listed as a finalist. Still, Jackson said she is hoping Fraser-Pryce will win the award.

“She has had a good season and I definitely would want her to come out on top, so we will just hope for the best,” Jackson told The Gleaner recently.

“Just to be among all the stars was a good feeling for me. I didn’t make it to the final and that’s OK; you know you make some and you don’t make some.”

Fraser-Pryce has already won this honour in 2013 after winning the 100m, 200m, and 4x100m treble at that year’s World Championships in Moscow.

The Women’s World Athlete of the Year 2022 will be announced on December 5, where Fraser-Pryce will go up against Kimberly Garcia Leon of Peru, Yulimar Rojas of Venezuela, Tobi Amusan of Nigeria and Sydney McLaughlin-Levrone of the United States.

“It is going really really good I would say. I am back and healthy so it’s definitely going good,” Jackson said.