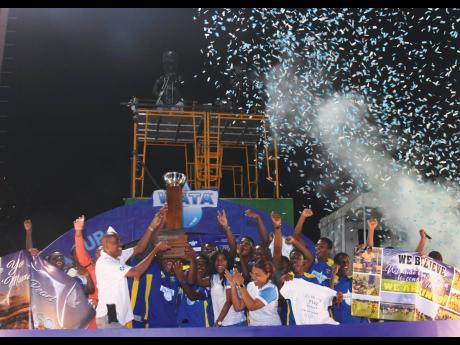 Leading from the front, captain Malachi Douglas opened the scoring for CC in the 14th minute. The player ran to the bench and held up a white shirt saying ‘Long live Manny manager’.

Five minutes into the second half Central came ever so close to an equaliser but Nathaniel Howe’s shot came back into play off the crossbar.

Kristoff Graham came up big to double the lead for CC when Devonti Hodges’ through pass picked out his brilliant run before he slotted the ball to the left of goalkeeper Leon Ricketts.

Keheim Dixon netted his 16th goal of the season in the 85th to send the venue into a frenzy and seal the deal for CC.

Lenworth ‘Teacher’ Hyde said it was good to have something to boost their morale after coming into the game with a heavy heart.

“It’s a great feeling after what we went through yesterday. It is a morale booster for the players to go out and do this for our manager, Mr Peart. They put it all on the pitch today and showed discipline and determination to get back this trophy that we lost last year. It was a very good performance from the boys and I must lift my hat to the team,” Hyde said.

Jermaine Douglas, coach of Central, was proud of his team’s performance this season, even if the fairy tale did not have a happy ending.

“It was a good run from the boys. No one expected us to be here but having been here we would have loved to have won, but it didn’t work out that way. We are giving thanks just the same,” Douglas said.

“It’s a good platform for next year. Most of the boys can come back, so we have to look to improve and do even better next year,” he added.