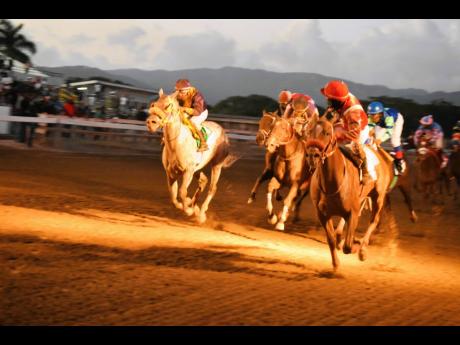 UNITED STATES-bred EXCESSIVE FORCE stormed home along the rail to collar MAHOGANY a half-furlong out in yesterday’s $18 million Mouttet Mile, leaving a cavalry charge for the minor placings in his wake.

The anticipated match-up between Jamaica Derby heroine ATOMICA and MAHOGANY fizzled three and a half furlongs out when the filly had to be urged to keep pace as RUNAWAY ALGO gave the top-billed stars a run for their money on the lead from the get-go.

ATOMICA blinked first and threw in the towel, skidding wide off the home turn while MAHOGANY used his terrifying speed to kick two lengths clear of RUNAWAY ALGO crying ‘no mas’.

However, while MAHOGANY’s supporters were jumping to the rafters, Bebeto Harvey was weaving his way to the rail with 7-1 shot EXCESSIVE FORCE, who had straightened out of sight in eighth place.

Asked to motor inside the last furlong and a half, Philip Feanny’s EXCESSIVE FORCE improved rapidly to catch up with JORDON REIGN’S and RUNAWAY ALGO before taking aim at MAHOGANY, sweeping past leaving the half-furlong marker for a length-and-quarter win ahead of DUKE storming wide at 73-1.

JORDON REIGN’S, who had stumbled out of the gate and trailed before mending rapidly to join the MAHOGANY chase, finished a respectable third under the circumstances.

MAHOGANY again proved that when on song he is a fearsome mile-chute runner but the toll of fighting off ATOMICA and RUNAWAY ALGO left him winded when EXCESSIVE FORCE came calling.

Harvey had two big winners on the 11-race card, EXCESSIVE FORCE in the Caribbean’s richest event after stunning punters with 40-1 upsetter, COLORADO RANGER, in the opening event for $550,000 claimers at six furlongs.

Meanwhile, champion jockey Anthony Thomas rode three winners to join Dane Dawkins on 88 winners atop the standings but was sent airborne aboard CRIMSON in the 10th at the clubhouse turn, causing him to stand down from ONEOFAKIND in the Mouttet Mile.

The weekend of activities continues at Caymanas Park this afternoon with the Thoroughbred Owners and Breeders Association of Jamaica Mixed Sale picking up from where it had left off when interrupted by a freak storm on November 13.