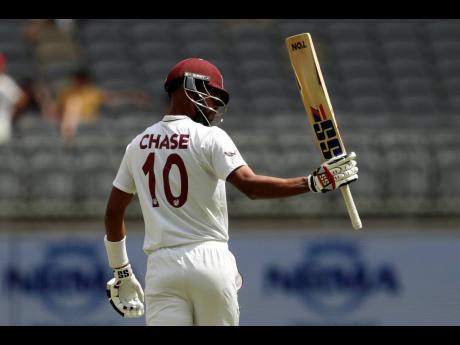 AP
West Indies’ Roston Chase raises his bat after making 50 runs against Australia on the fifth day of the first Test in Perth, Australia yesterday. 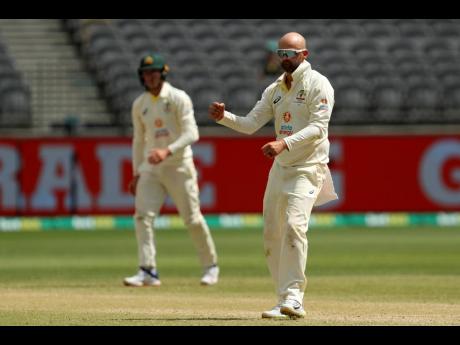 Roston Chase’s first Test 50 in two years proved insufficient as a first-session collapse all but condemned West Indies to a heavy 164-run defeat to Australia in the opening Test yesterday.

Resuming the final day on 192 for three in pursuit of an improbable 498, but with survival the main objective, West Indies lost two wickets inside the first hour and another two before lunch, before being dismissed for 333 about 35 minutes before tea at Perth Stadium.

Much of West Indies’ hopes rested on captain Kraigg Brathwaite, but he added only nine to his overnight 101 before becoming one of off-spinner Nathan Lyon’s six wickets for 128.

Chase, entering at number eight, then carried the fight for the Caribbean side with 55 – his 10th Test 50 – in a precious 82-run, eighth-wicket partnership with Alzarri Joseph, who entertained with a bold 43.

Once the stand was broken, however, West Indies lost their last three wickets for 18 runs, to slump to their 14th defeat to Australia in their last 18 Tests and extend their abysmal 19-year run without a win against the hosts.

All-rounder Roston Chase celebrates his 10th Test 50 on the final day of the first Test against Australia.

“Obviously disappointed with the loss. We gave away the wickets in the first innings, but it was a good fight as a team and as a bowling unit,” Brathwaite said afterwards.

“It’s good to see the fight from the batters, but still a lot of improvement to be done.”

He added: “There was consideration to go for runs if we had wickets, but losing wickets put us under pressure.”

West Indies’ start was less than ideal. Left-hander Kyle Mayers, yet to score overnight, spanked two attractive offside boundaries in scoring 10, before edging Lyon low to Steve Smith at first slip in the morning’s sixth over.

And Brathwaite followed five overs later after facing 188 deliveries in just over five hours and striking 13 fours, misjudging the length, playing back to Lyon, and having his stumps rattled.

“I was pretty happy with that one,” said Lyon. “Kraiggy batted extremely well. He’s a superstar batsman and I had to be patient.”

Former captain Jason Holder spent nearly an hour at the crease over three runs but was undone in the second over following the drinks break, when he nicked a booming drive at a straight delivery from off-spinner Travis Head and was taken by Smith, diving to his left at first slip.

Desperate for a partnership before the interval, West Indies failed to get one as pacer Josh Hazlewood struck with the second new ball, Joshua Da Silva guiding a wide delivery to third slip to depart for 12.

On 258 for seven at lunch, Chase and Joseph kept alive the tourists’ faint hopes of saving the game in their battling half-century stand.

While Chase faced 85 balls in nearly two and a quarter hours and counted three fours and a six, Joseph chanced his arm as usual, belting four fours and three sixes off 73 deliveries.

Joseph eventually played down the wrong line to Head and was bowled. Chase was ninth out, lofting Lyon to deep mid-wicket where Mitchell Starc took a tumbling catch.

The second and final Test is a pink-ball affair at Adelaide Oval, starting on Thursday.