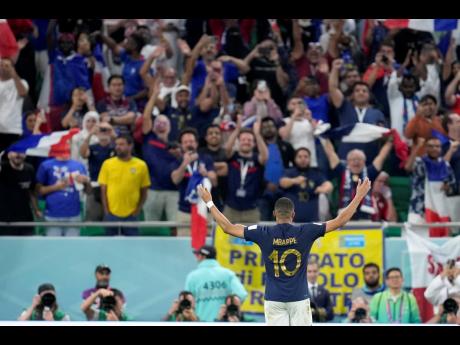 AP
France’s Kylian Mbappe salutes his fans after scoring his side’s third goal during the World Cup round of 16 match between France and Poland, at the Al Thumama Stadium in Doha, Qatar yesterday.

Many observers became admirers of France at the 2022 FIFA World Cup yesterday after the reigning champions dispatched Poland 3-1 in the round of 16. However, after seeing almost all of the teams in the group stage, analyst Michael Hall suggested that it might be possible for the French to retain their title.

Hall said France were accomplished, athletic, and blessed with the most dangerous man at the Qatar tournament: Kylian Mbappe.

Asked last Thursday to pick the winners of the World Cup, he said France have overcome the absence of injured stars, including Ballon d’Or winner Karim Benzema, and the midfield trio of Presnel Kimpembe, N’Golo Kante, and Paul Pogba.

“Certainly, they have the biggest weapon of the World Cup in Mbappe, and all of the talk about no (Karim) Benzema, no (Presnel) Kimpembe, no (N’Golo) Kante, no (Paul) Pogba does not appear to trouble them. So France may be a good bet to do something that hasn’t been done in the last 60 years, which is to repeat as champions,” Hall reasoned.

Since that conversation, Mbappe raised his tally of goals in Qatar to five, with a double against Poland. The second was an artful right-foot curler past the tournament’s outstanding goalkeeper, Wojciech Szczesny.

France will play England in the quarterfinal after the Englishmen eased past Senegal 3-0 in their round-of-16 match. The encounter between France, winners in 1998 and 2018, and 1966 champion nation England, is set for December 10.

“Brazil, for me, have been sort of workmanlike more than anything else,” he said.

With regard to superstar Cristiano Ronaldo, and the 2016 European champions, he said: “Portugal, I think, are going to, despite all of the hype and the this and the that, to live and die with Ronaldo. That’s maybe just stating the obvious, but they’re going to die with him because clearly, he’s not who he used to be, and they remain too, what’s the word I want to use, subservient to him and believe that they have to, the players themselves, that they have to pass it to Ronaldo when maybe there’s a better option.”

In a clear downgrade of the Portugal title credentials, Hall concluded, “I think they’re going to have a challenge.”