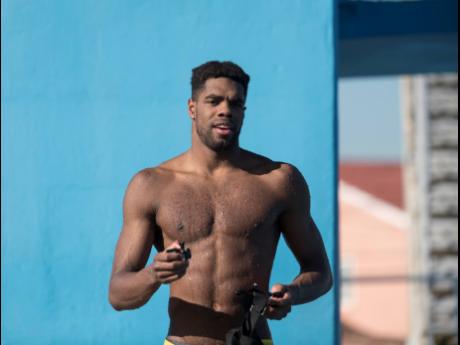 Last Saturday, Jamaican diver Yona Knight-Wisdom sustained an injury to his knee while competing at the December 1-4 Scottish National and Open Diving Championships in Edinburgh. The injury could keep him out of the pool for some time.

The 27-year-old told The Gleaner that he would know the full extent of the damage when the results of an ultrasound are returned today.

Nevertheless, he expects to make a quick recovery and be back in top shape before the Olympic qualifiers begin next July.

“I went to the hospital yesterday (Saturday) and had an X-ray, and there isn’t a fracture or anything, So I am waiting on an ultrasound to see if there is any tear in the tendons, which hopefully, if there is, it is only minor.

“I can move around. I can stand up, but I have an immobiliser at the moment. Hopefully. it (injury) may not require surgery, but either way, I do not think the recovery period will be too long,” he updated.

“The ultrasound will be on Monday, and then I will get a clearer idea of what the full damage is and what the recovery time will be after that. Once I get that information, I can make plans with my coaches.

“But my instinct, although not based on much information, is that it will not keep me out for too long, maybe for two months, which isn’t too bad because Olympic qualification starts in July. So there is plenty of time to prepare for that,” he contends.

Knight-Wisdom explained that after putting in two solid days of performances, he was preparing for the final last Saturday when the unfortunate mishap occurred.

He pointed out that his knee, essentially, gave way when the springboard came up under him while he was going down, and it compressed his knees, causing them to buckle under the pressure.

“My legs were caught up underneath me, and it was pretty uncomfortable,” he stated.

His doctor’s preliminary analysis points to no rupture in the knee, and at the moment, Knight-Wisdom is feeling minimum pain.

“I will do whatever is necessary to get back as quickly as possible, but I will wait for the results (of ultrasound) and see what is happening. If surgery can be avoided, that will be the best, but I will get the advice from the medical doctor.”

Knight-Wisdom was looking to improve on his performance from Berlin earlier this season and was feeling much improved compared to that previous outing.

“I just wanted to see how I was getting on. It is still early in the season, and I didn’t expect to be back to my normal level, just to improve on the performance of Berlin.

“In Berlin I felt slow and sluggish. I didn’t feel very strong. But this weekend, I felt much stronger, much sharper. I am still way off from where I need to be, so hopefully, this does not lead to me losing that too much.

“There were a few events I was hoping to do next year, but there will be a question mark in terms of how those events will go for me, whether I will be able to do them at all.

“But July will be the first opportunity to qualify for the Olympics, and that is a enough time to work and rebuild properly and get back to a good level.

“It is not too much of a concern now, but I will see what the ultrasound says when I get it, and then we can plan from there,” Knight-Wisdom said.