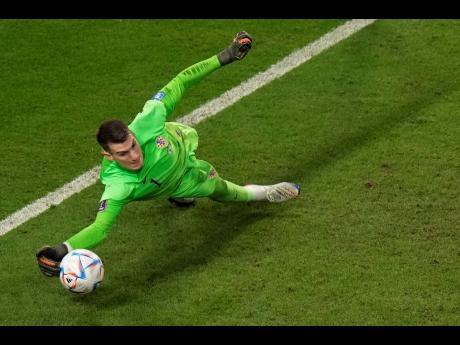 AP
Croatia’s goalkeeper Dominik Livakovic saves a penalty kick by Japan’s Kaoru Mitoma during the World Cup round of 16 match between Japan and Croatia at the Al Janoub Stadium in Al Wakrah, Qatar yesterday.

Croatia are going deep at another World Cup, and the team is taking the long route once again.

Goalkeeper Dominik Livakovic saved three penalty kicks in Croatia’s 3-1 win over Japan in a shootout yesterday securing a return to the quarterfinals for the runners-up in the 2018 tournament. The match was tied at 1-1 after extra time.

On their surprising run to the final in Russia four years ago, Croatia needed extra time in each round in the knockout stage – and twice came through a penalty shootout.

Livakovic was the backup goalkeeper to Danijel Subasic in 2018 but took centre stage this time, diving to his left to keep out Japan’s first penalty by Takumi Minamino, to his right to block Kaoru Mitoma’s effort from the second penalty, and then again to his right to deny Maya Yoshida off the fourth.

That gave Mario Pasalic the chance to put away the clinching penalty. The substitute joined the rest of Croatia’s jubilant players in heading right for Livakovic after hitting the back of the net.

“In Croatia, we do things this way,” Livakovic said. “I continued the tradition.”

The similarities with 2018 do not stop there. Just like in every game in the knockout stage that year, Croatia fell behind to Japan when Daizen Maeda swept in a close-range finish in the 43rd.

Ivan Perisic equalised by meeting Dejan Lovren’s cross from the right with a header into the bottom corner from near the penalty spot in the 57th.

Dalic said his team’s ability to recover from losing positions “reflects the Croatian people,” with a nod to a psyche the players forged growing up in a country ravaged by war as the former Yugoslavia broke up in the 1990s.

“We never give up ... We have been through so much pain and the players have great pride,” Dalic said. “The whole of Croatia is supporting us and this is a way of giving them faith for a better tomorrow.”

While Croatia – also semifinalists in 1998 – prepare to take on Brazil in the quarterfinals, Japan exited a World Cup in the round of 16 for the fourth time, just like in 2002, 2010 and 2018. The Asian team also lost in a penalty shootout to Paraguay at that stage in 2010.

Asia is still waiting for a second team to advance beyond the last 16, after South Korea on home soil in 2002.

Japan made their mark in Qatar, though, beating Germany and Spain – two of the last three World Cup champions – in huge upsets in the group stage.

“The players showed a new era of Japanese football, I think,” Japan coach Hajime Moriyasu said. “They should use this feeling of being upset and try to go further next time.

“We cannot be superheroes in one go. We have to improve step by step. But Japan is reaching a level where we can play on the world stage.”

The result guarantees at least one more World Cup game for 37-year-old Croatia captain Luka Modric, one of the best midfielders of his generation.