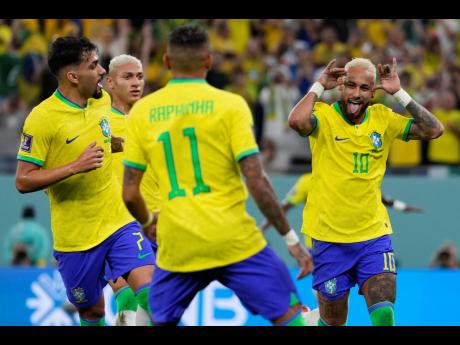 AP
Brazil’s Neymar (right) celebrates with team mates after scoring his side’s second goal during the World Cup round of 16 match between Brazil and South Korea at the Education City Stadium in Al Rayyan, Qatar yesterday.

It was the same old Neymar out there, looking fit and scoring a goal to move closer to Pelé’s all-time record and lead Brazil into the World Cup quarterfinals.

Neymar returned from injury and converted a first-half penalty in Brazil’s 4-1 win over South Korea in the round of 16 yesterday. He reached 76 goals with the national team, one shy of the mark set by Pelé, who said he would watch the match from his hospital bed in Sao Paulo.

“I was very scared,” Neymar said. “It was very difficult after getting injured like I did. I was crying the entire night. My family knows what I had to go through. But in the end it all worked out. It was worth the effort to keep undergoing physiotherapy.”

The 82-year-old Pelé is recovering from a respiratory infection that was aggravated by COVID-19, leaving fans in Brazil and in Qatar worried about his condition. Neymar carried a banner with the football great’s image and “Pelé” written on it after the match, and the entire team then posed behind it near midfield.

“It’s tough to talk about Pelé with what he is going through,” Neymar said. “We wish he can get well soon. We hope we made him feel a bit more comfortable with the banner and with the victory.”

South Korea were trying to advance past the round of 16 for the first time since their historic run to the semifinals as a co-host in 2002.

Neymar damaged ligaments in his right ankle in the team’s opening match against Serbia and at the time there were doubts if he would play again at the World Cup. He was clearly back, and there were no signs of the injury as he led Brazil to a comfortable victory and a spot in the World Cup quarterfinals for the eighth straight time.

Brazil will next play Croatia on Friday.

Neymar scored his first goal of this year’s World Cup after kissing the ball and calmly sending a low shot from the spot after waiting for the goalkeeper to choose a side in the 13th minute. He danced as his teammates huddled around him, then did dance moves along with Vinícius Junior and other teammates before raising his arms to the sky and smiling broadly.

Neymar was forced out of the 2014 World Cup in Brazil after getting hurt in the quarterfinals. Yesterday he joined Pelé and Ronaldo with goals for Brazil in three different World Cups.

Fans chanted his name as he walked off the field after the match. He had been substituted in the 81st.

Vinícius Júnior scored the first goal from inside the area after a cross by Raphinha in the seventh minute, Richarlison added to the lead from close range after a nice exchange of passes by the Brazilians in the 29th, and Lucas Paquetá scored the fourth before halftime after an assist by Vinícius Júnior.

They celebrated each goal by dancing, and even Brazil coach Tite participated in Richarlison’s traditional “pigeon” celebration.

South Korea coach Paulo Bento said after the match he was quitting. The Portuguese coach took over the national team after the last World Cup and his contract was due to end after this year’s tournament.

It was the last World Cup match at Stadium 974, which is expected to be fully dismantled. The port-side structure that seats more than 40,000 fans was partially built from recycled shipping containers and could be shipped to other countries that need the infrastructure.