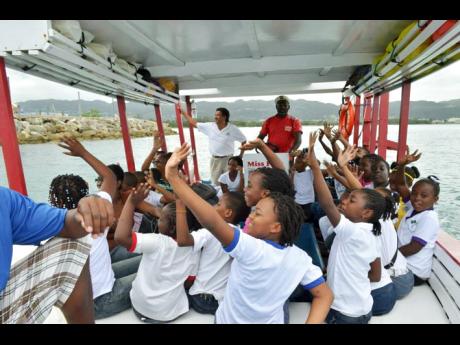 Photo Contributed
Members of the Barracks Road Primary School Environmental Club waves as they pass by a section of the Montego Bay coastline during a glass bottom boat tour sponsored by the Montego Bay Marine Park Trust last week Friday.

Despite a myriad challenges, to include being under-funded, poor environmental practices by the general public, and lack of enforcement by law officials, the Montego Bay Marine Park (MBMP), which has been operating for 24 years, is claiming a 50 to 75 per cent success rate in meeting its marine environment protection mandate.

"Funding has been one of the main challenges over the years," said Hugh Shim, executive director at the MBMP. "We are funded in part by the Tourism Enhancement Fund (TEF), National Environment and Planning Agency and the Ministry of Agriculture and Fisheries ... but it is always an expensive undertaking dealing with the sea, as one outboard motor for a boat costs in excess of a million dollars."

Despite the challenges being faced, Shim said his organisation is working assiduously to care for the environment within the MBMP to ensure that the fish stock is protected and the reefs remain alive and healthy.

"When we go to the beaches, you pick up several hundred bags of garbage in a three-hour period, so we are asking for the authorities to, again, send out litter wardens, place receptacles on beaches, and have the NSWMA (National Solid Waste Management Authority) clean up the beaches," said Shim, a former training manager at the Tourism Product Development Company.

According to Shim, land-based litter, washing down into the sea via gullies and drains, is also posing a serious problem to the MBMP. As a result, the Jamaica Environment Trust recently assisted with the installation of a 500-foot litter boom to trap floating debris which has been entering the sea from the South Gully.

During a 1992 Rapid Ecological Assessment conducted by The Nature Conservancy, an international environmental organisation, it was found that the MBMP had 82 species of fish, 91 species of benthic algae, two species of seagrass, 41 species of sponges, 41 species of coral and 16 species of Octocoral. Fish species found in the park included snapper, parrot, jack, squirrel, barracuda, trumpet, doctor, angel, snook, crabs, conch, lobster, octopus, and lion fish.

Faced with incursions by spear fishermen, who would illegally enter the protected area to fish, the MBMP spearheaded several programmes to educate them about the importance of the marine park. Additionally, programmes such as the Alternative Livelihood Project For Spear Fishermen Programme were developed, with assistance from TEF, to create alternate sources of income for the spear fishermen.

"The project (Alternative Livelihood Project For Spear Fishermen Programme) was turned over to the fisherfolk, but it failed to gain traction then, but we have had a recent commitment from them (the fisherfolk) that they are going to try again with this programme," said Shim, who noted that the programme entailed landscaping and the erection of buildings to house restaurants.

While the negatives continue to undermine the operations of the MBMP, Shim said it has not all been negative, especially with regard to the two established and monitored fish sanctuaries.

We have had positives. We are now seeing a return of parrot fish to sections of the reef at good sizes, healthy coral reefs. We have seen dolphins, which means that they have something to eat in the park, which is a really positive sign,? said Shim. ?and, of course, we have also had educational programmes in schools under our Care and Protect anti-pollution project, and also coastal clean-up undertaken with stakeholders and friends of the marine park.