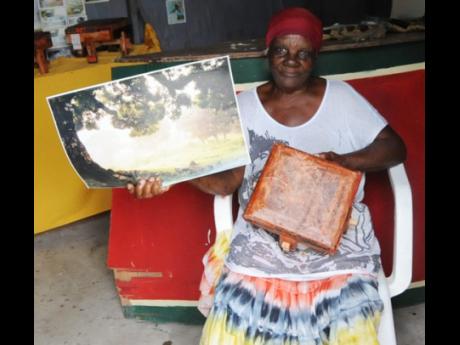 Growing up in an untainted Accompong Town, where traditional maroon culture was highly revered, is a much cherished memory that will stay with 73-year-old Constanchia Foster for the rest of her life.

The affable "Consce," as the elderly woman is popularly known, now operates a shop in the centre of the village, a vantage point that offers her a chance to witness the new 'bling' culture, which is steadily invading her beloved hometown.

"Those (her youthful days) were really good but hard times," recalled Foster, reflecting on her childhood. "... it was a rich and vibrant time in my history as a child growing up in Accompong."

"There was not much to do back then, as a young person," continued Foster. "... But you learn the ways of the maroons. I used to eat plenty parched corn, some run-dung and bammy and, of course, a long cup of lemonade. Those were some of the things which made life in Accompong delightful."

While the lines on her face denotes age, it is clearly not reflective of Foster's vibrancy as today, she continues to hold sway as both a much revered senior citizen, a rich reservoir of maroon history, and a symbol of what it means to be industrious.

"My mother used to look after bammy and run-dung and, at that time, the culture was more out there. The people back then had plenty of respect for our heritage as Maroon people. We wore our history on our shoulders and were happy to do so," recalled Foster.

"Now it's less that way. These young people are into computer and these things, which, by themselves are not bad, except they find less time for our customs, like taking part in our festivities," added the elderly woman.

Foster is not worried

Nonetheless, Foster is not worried about the attitude of the current youth population as according to her, there are still enough people keeping the ways of the Maroon alive for her to be hopeful.

"The Colonel and his deputy, people like Mr Currie (Melville) and several others, including some of the young people, are making sure our heritage is protected and passed on to the next generation," said Foster.

Currie, at aged 82, the official Accompong historian, takes great delight in passing on the proud history of the maroons to the younger generation of maroons.

According to Currie, the history of the town, speaks primarily to the heroic contribution of revered leaders such as Accompong Nanny, Cudjoe, Johnny, Cuffie, and Quako.

"Accompong was born, so to speak, thanks to the Spanish, who fled the island after the British invaded. They left freed slaves, but war erupted between these runaway slaves and the British. This war lasted 80 years," Currie said.

According to Currie, the village was named after the famed maroon warrior Accompong, who Nanny eventually married after fleeing to the Cockpit Country, where they were cut-off - marooned - prior to the peace treaty of 1739.

"The celebrations and festivals we have, traces our history and I am one man, who is very proud of my history. I wouldn't want it any other way," declared Currie.