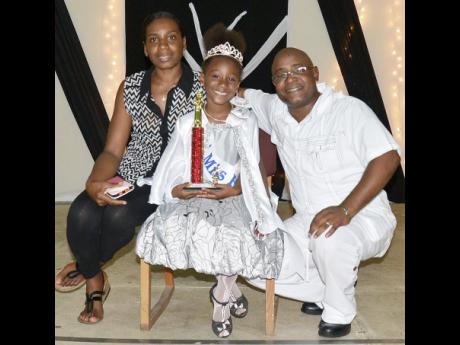 Natalia Malcolm (centre) is flanked by her parents Andrea (left) and Konrad right after she won the Mini Miss Hanover Pre School title at the Anglican Church Hall in Lucea, Hanover, recently.

Natalia Malcolm and Chrisanna Gordon emerged the toast of the Mini Miss and Miss Hanover Pre and Preparatory School pageant when they walked away with the respective titles at a well-attended coronation show which was held at the Lucea Anglican Church Hall, in Hanover, last Saturday night.

In addition to seeing the various contestants showing off their respective skills, patrons were also musically entertained by stellar performances by up-and-coming Montego Bay-based singer, Miguel Antonio, and 12-year-old vocalist Singer J, a student of the Claremont All-Age School, also in Hanover.

In the Miss Hanover Preparatory category, the multi-talented Gordon, who quickly emerged as the crowd favourite, first showed off her exceptional talent when she performed an African dance. She subsequently wooed the audience when she emerged on stage in her recycled outfit - a gown made from the Yellow Pages of the telephone directory.

Amid the appreciative cheers for Gordon, her obviously overwhelmed mother, Annaliese Walker, who was among the numerous family members offering solid vocal support, was spotted crying tears of joy when the announcement was made that her daughter had won.

While Aaliyah Martinez was announced the first runner-up, for unknown reasons, the organisers did not announce a third-place position.

In the Mini Miss Hanover pre-school category, it was quite clear that Malcolm was the contestant to beat as, from the moment she entered the stage, it was obvious that she was enjoying herself. There was no hint of shyness as she strutted across stage smiling happily with eyes shining, impressing judges Shaurna Miller, Denise Hudson, Patrick Thelwell, and Margaret Chambers.

As was expected, Malcolm emerged the winner, upstaging Kayondra Parkinson and Summer Townsend, who placed second and third, respectively. The other two contestants were Yendi He and Paige Burnett.