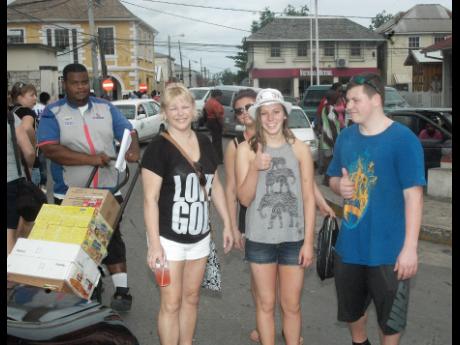 Adrian Frater
With stakeholders in western Jamaica expressing a desire to see the nation's tourism product getting stronger after Thursday's general election, this mixing and mingling of locals and visitors, which unfolded in Falmouth, Trelawny, on Nomination Day, might be just what they will be expecting to see.

With just over 48 hours to go before the 2016 general election, persons aligned to some key sectors in western Jamaica say that central to their expectations from the new government will be the implementation of mechanisms to address economic growth and productivity.

"We want to see a trickle-down effect of all the developments that happen at the 'Kingston level'... we want to see people getting real jobs that they can have real life transformation; not a two-week handout ... because that is not sustainable, that is not transformation," said Carla Ledgister, president of the Trelawny Parish Development Committee.

"You want to see a true transformative development that impacts the life of the man on the ground. You don't want two chicken fi eat; you want a chicken farm to sustain you forever," added Ledgister.

"At most of the parish or community levels, you hear these big plans that are being achieved; but at the local level, the micro-level, you are not seeing a reflection, so you keep wondering, where is this development taking place?" continued Ledgister. "We need sustainable job development - not the crash programme kind of work where one person gets a job for two or three weeks and him get a pay, and him go a him yard, and that's it."

Ray Kerr, vice-president of the Mt Peace/Clifton Farmers' Group, in Hanover, said the elevation of agriculture is vital to any positive growth in Jamaica's economy, noting that the issues which hinder optimal production must be addressed by the incoming administration with a sense of urgency.

Angela Haye, principal of the Hanover Educational Institute, emphasised the need for youth development and training in the western region, which, she says, has high levels of juvenile delinquency and a large percentage of unattached youths.

"Clearly, they must address training in terms of either entrepreneurial skills, or in the various sectors, so that young people can get an opportunity to enter the workforce," said Haye. "With young people having the ability to get jobs, this will clearly steer them away from deviant activities because they will have something to look forward to. A focus must be placed on garnering their skills and strengths so that they can create their own livelihoods."

Daniel Grizzle, a vice-president of the Negril Chamber of Commerce, said that where tourism is concerned, the state of the environment should take centre stage, as this ultimately affects whether or not visitors come to the island.

"Where tourism is concerned, especially where Negril is concerned, I am really, truly hoping that whichever party wins, that they choose a minister of environment who is really serious about the environment, because that is what tourism is about," said Grizzle.

"For us here, in particular in Negril, we have seen an increase in rooms and an increase in residences. Our sewerage system is a secondary one and is way, way inadequate to deal with the current situation. We need a tertiary plant and we need one that will take into consideration the increase that we have seen over the last 10 years since that one, and the possible increase in another 10 years," added Grizzle.