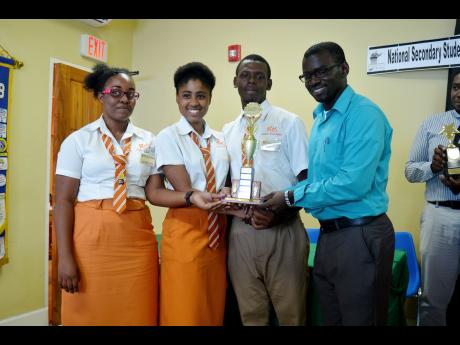 Rhodes Hall High School crowned themselves champions of the Hanover Youth Debate Competition when they upstaged last year's champions Green Island High School in the final, which was held recently at the National Centre for Youth Development's (NCYD) offices at the Watson Taylor Park.

The competition, which was staged by the NCYD over a four-week period, also featured Rusea's Knockalva Technical and Merlene Ottey high school the other three high schools in the parish.

The two finalists debated the moot: 'Be it resolved that scamming creates an escape for unemployed youth.' Green Island, which proposed the moot, was represented by Jhanelle Craib, Tanya Beckford and Deborah Green; while Rhodes Hall, who opposed, had Adrianna Parchment, Romano Williams and Krystina Vernon as their debaters.

Youth empowerment officer for Hanover, Donmarie Latouche, who coordinated the competition, told Western Focus that one of the main objectives of the competition was to build the students' skills in advocacy.

"The purpose of the competition was to afford young leaders the opportunity to participate in a debate in a healthy space; to have them start developing their understanding of youth advocacy and participation as budding leaders," explained Latouche. "It was also designed to help them interact more outside of their locale ... in more than just the school setting; a platform where they can start engaging with external groups, engaging with other schools to see how the culture is across the board."

"The response from the sponsors has been tremendous. I sent out requests to eight sponsors and every single one of them helped," stated Latouche. "They have been supportive and are excited about it, because one of the things I am sure I do is, when I started creating the moots, I allowed them as sponsors and stakeholders to have direct involvement, so they felt a part of it."

In the competition's sectional awards, the Best Speaker trophy went to Green Island's Janelle Craib; Adrianna Parchment Craib, of Rhodes Hall, was judged the Most Outstanding Speaker, while the Most Improved Speaker award went to her schoolmate, Romano Williams. Rhodes Hall was also presented with the Most Disciplined Team award.