Sumfest & MoBay - a marriage of necessity 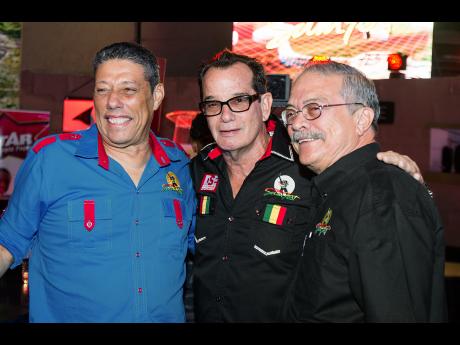 File
The foundation and the future: Reggae Sumfest founders Johnny Gourzong (left) and Robert Russell (right) sharing centre-stage with Joe Bogdanovich, the new man at the helm. Bogdanovich will be investing US$2 million into the festival over the next two years.

When Reggae Sumfest had its inaugural staging in 1993, it was basically a rescue act by a group of Montego Bay based investors, who felt something had to be done to save the city’s summer after Reggae Sunsplash, which had been the region’s premier music festival for over a decade, suddenly pulled out at the end of the 1992 event.
The decision was against the background of the fact that, Montegonians had grown accustomed to having a summer festival with the capacity  to fill up airline seats and hotel rooms and create a financial windfall for ground transport operators, small guest houses, restaurants, craft vendors, ‘rent-a-dread ‘ (locks men who serve as companion to white female tourists) and even the sellers of ‘reggae beds’ (pieces of cardboard), which tired fans use as both seats and beds.
In its early years, Reggae Sumfest faced a variety of challenges. At first, it was the competition for sponsorship, artistes and patrons with Reggae Sunsplash, which was being staged outside the western region. Later came other issues such as concerns about the lyrical contents of some artistes, which was deemed as being detrimental to the brand of some sponsors.
“We have had many challenges over  the years, but we have always found ways to survive,” Robert Russell, a long-standing director of Summerfest Promotions, the promoters of Reggae Sumfest, told The Gleaner.  “Reggae Sumfest is very good for  Jamaica and that is why we have always had the endorsement of the government through the Jamaica Tourist Board.”
However, after holding on gallantly for well over two decades, giving loyal local and overseas fans high quality entertainment from some of the  biggest names in reggae, R & B and hip-hop music, the festival is now under new management, albeit some of the old faces are still around.
Earlier this year, Summerfest Promotions announced that it had sold the controlling rights of the festival to American investor Joe Bogdanovich, the CEO of Downsound Records.
“I know Joe (Bogdanovich) is the right man to take Reggae Sumfest to the next level … he is a great friend of our music and we know that with him, the festival is in good hands,” said businessman Johnny Gourzong, who served for many years as executive chairman of Summer fest Productions Limited.
In signalling his intention to take the festival to another level, Bogdanovich has announced a bold plan to invest US$6 million into the festival over the next two years, which he hopes will put it on par with some of the world’s biggest music festivals.

“We believe reggae music has the potential to be much bigger than it is globally, but we need to rebuild the base in order to get the industry to thrive,” said Bogdanovich, who has broken international grounds for several Jamaican reggae acts. “…that is why we are using only Jamaican based artistes this year … we need to show the world that we have enough international superstars here in Jamaica.
Bogdanovich bold plans to take Reggae Sumfest to another level is sweet music to the ears of many local stakeholders, who have long embraced the view that, “the  summer belongs to Sumfest.’
“We are looking forward to a long and fruitful relationship with Reggae Sumfest under the leadership of Joe Bogdanovich,” said Tamika Higgins-Baker, ‎the National Sales and Marketing Manager at Iberostar Rose Hall Beach and Spa Resort, in Montego Bay. “We are always excited to be a part of the staging of this event.”