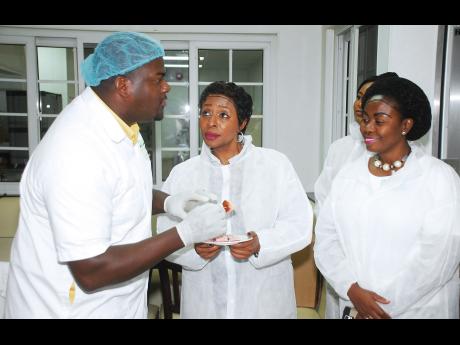 x
Desta Pink, meat processing plant manager at local manufacturer, CPJ explains the preparation process of their well-loved ham to US congresswoman, Yvette D. Clarke and Gloria Henry, president of the Montego Bay Chamber of Commerce and Industry, during a tour of the company's production plant on Saturday. This follows consultation with the company's COO, Roger Williams, Sharon Ffolkes Abrahams, Minister of State in the Ministry of Industry, Investment and Commerce and Conrad Robinson of JAMPRO, among others.

President of the Montego Bay Chamber of Commerce and Industry (MBCCI), Gloria Henry, has added her voice to the many voices that are now speaking out against the recent spate of killing in Montego Bay and the wider St. James.

Henry, who spoke at last Wednesday night's launch of the Kiwanis Club of Providence Montego Bay's Breast Cancer Run/Walk 2016, explained that the upsurge of crime is beginning to take its toll not just on citizens but business operators as well.

'We are beginning to see where we can lose some business because of crime in Montego Bay," said Henry, who is also the vice-president of operations and customer relations at the Montego Bay Free Zone.

At a recent Gleaner editor's forum in Montego Bay, several prominent stakeholders including businessman Godfrey Dyer, who is a noted hotelier and chairman of the Tourism Enhancement Fund , said he was all for any measures to rein in the lawlessness, including a limited state of emergency.

"Business cannot thrive in an environment of lawlessness and as things are today, we stand to lose a lot," said Dyer, in reference to the 15 murders that were committed in the week before the editor's forum. "We must find a solution to this problem now ... even it means a state of emergency."

For her part, Henry stated last week that both the tourism and the business process outsourcing sectors the two fastest growing industries in the region are in jeopardy as crime and violence was threatening their survival while significantly tarnishing Brand Jamaica.

While she was not supportive of the call for a state of emergency, Henry used her address to urged the citizens of the tourist capital to remain hopeful while the police and lawmakers seek to bring an end to the lawless, which has robbed Montego Bay of the proud tag, 'The Friendly City'.

According to Henry, the MBCCI has made a recommendation for the establishment of a police station in the heart of Montego Bay. She also called for the police to be provided with the necessary resources to investigate and identify those who break the law and for a stable command structure for at least three years.

"We need to keep commanding officers for at least three years minimum so that they can build trust in the communities because residents need to regain the trust of the police," said Henry in voicing her objection to the common practice of commanding officers being transferred as soon as they are settled in a division.

Following the recent injection of additional police personnel (police/military) and crime-fighting assets, including armoured personnel carrier, there has been a significant reduction in murders, albeit the current count for the year stands at 209 just three short of last year's all-time record of 212.