As hospital numbers fall, fatigued staff get relief at last 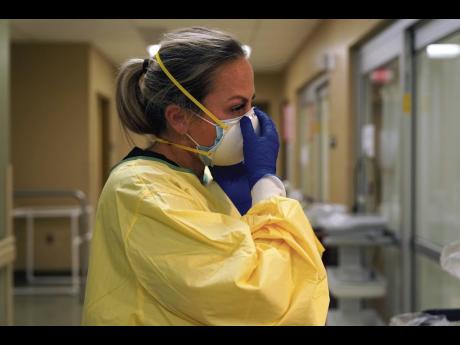 AP
In this November 24, 2020, file photo, registered nurse Chrissie Burkhiser puts on personal protective equipment as she prepares to treat a COVID-19 patient in the in the emergency room at Scotland County Hospital in Memphis, Missouri.

When COVID-19 patients inundated St Louis hospitals, respiratory therapists arriving for yet another gruelling shift with a dwindling supply of ventilators would often glance at their assignments and cry, heading into the locker room to collect themselves.

“They were like, ‘Man, another 12 hours of this slog of these on-the-verge-of-death patients who could go at any moment,’ and just knowing that they had to take care of them with that kind of stress in the back of their head,” recalled Joe Kowalczyk, a respiratory therapist who sometimes works in a supervisory role.

Now, the number of people hospitalised with COVID-19 in the US has dropped by 80,000 in six weeks, and 17 per cent of the nation’s adult population has got at least one dose of a vaccine, providing some relief to front-line workers like Kowalczyk. On his most recent shift at Mercy Hospital, St Louis, there were only about 20 coronavirus patients, down from as many as 100 at the peak of the winter surge.

“It is so weird to look back on it,” he said. “Everyone was hitting their wit’s end definitely toward the end just because we had been doing it for so long at the end of year.”

The US has seen a dramatic turnaround since December and January when hospitals were teeming with patients after holiday gatherings, and pandemic fatigue caused a surge in cases and deaths. Health officials acknowledge the improvement but point out that hospitalisations are still at about the same level as earlier peaks in April and July and right before the crisis worsened in November. Deaths are still persistently high, though much lower than the peak in early January, when they sometimes exceeded 4,000 per day.