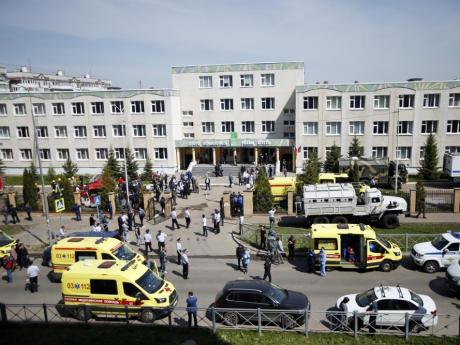 Ambulances and police cars and a truck are parked at a school after a shooting in Kazan, Russia, Tuesday, May 11, 2021. (AP Photo/Roman Kruchinin)

MOSCOW (AP) — A gunman attacked a school Tuesday morning in the Russian city of Kazan, sending students running out of the building as smoke poured from its windows.

At least nine people were killed — seven eighth-grade students, a teacher, and another school worker — and 21 others were hospitalised, Russian officials said.

Footage released by Russian media outlets showed students dressed in black and white running out of the building.

Dozens of ambulances lined up at the school's entrance after the attack and police fenced off access to the building.

Russian media said while some students were able to escape, others were trapped inside during the ordeal.

All students were eventually evacuated to nearby day care centers and collected by their families.

Officials said the attacker has been arrested and police opened a criminal investigation into the shooting.

Authorities immediately put additional security measures into place in all schools in Kazan, a city 430 miles east of Moscow.

Authorities announced a day of mourning on Wednesday to honour the victims of the shooting and cancelled all lessons in Kazan schools.

While school shootings are relatively rare in Russia, there have been several violent attacks on schools in recent years, mostly by students.

Russian media said the shooter was a former student of the school who reportedly called himself “a god” on his account on the messaging app Telegram and promised to “kill a large amount of biomass” on the morning of the shooting.

The account was blocked by Telegram after the attack, the independent news outlet Meduza said.

Russian lawmaker Alexander Khinshtein said on Telegram the suspect received his gun license less than two weeks ago and the school didn't have any security aside from a panic button.

Russian President Vladimir Putin expressed his condolences to the families of the victims and wished a speedy recovery to the wounded, ordering the government to give them all the necessary assistance.

Russian officials promised to pay victims; families one million rubles each and give 200,000 to 400,000 rubles to the wounded.