Biden urges G-7 leaders to call out, compete with China 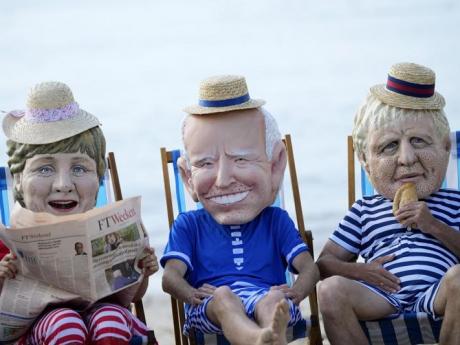 Climate activists from Oxfam, wearing giant heads depicting the leaders of the G7, sit on beach chairs as they participate in an action on Swanpool Beach in Falmouth, Cornwall, England, Saturday, June 12, 2021. Leaders of the G7 gather for a second day of meetings on Saturday, in which they will discuss COVID-19, climate, foreign policy and the economy.

Leaders of the world's largest economies on Saturday unveiled an infrastructure plan for the developing world to compete with China's efforts, but the democracies didn't immediately agree on how to publicly call out Beijing, including for its forced labour practises.

The proposal on labour practises is part of President Joe Biden's escalating campaign to get fellow democratic leaders to present a more unified front to compete economically with China in the century ahead.

But while they agreed to work toward competing against China, there was less unity on how adversarial a position the group should take with Beijing.

​Canada, the United Kingdom and France largely agreed with Biden's exhortation to condemn China's forced labour practises, while Germany, Italy and the European Union showed more hesitancy in Saturday's first session of the Group of Seven summit, according to a senior Biden administration official who briefed reporters on the condition of anonymity because they were not authorised to discuss the plans publicly.

Biden hopes the denunciation will be part of a joint communique to be released Sunday when the summit ends, but some European allies are reluctant to so forcefully split with Beijing.

Before Biden took office in January, the European Commission announced it had come to terms with Beijing on the Comprehensive Agreement on Investment, a deal meant to provide Europe and China greater access to each other's markets. The Biden administration had hoped to have consultations on the pact.

But the deal has been put on hold, and the European Union in March announced sanctions targeting four Chinese officials involved with human rights abuses in Xinjiang. Beijing responded by imposing sanctions on several members of the European Parliament and other Europeans critical of the Chinese Communist Party.