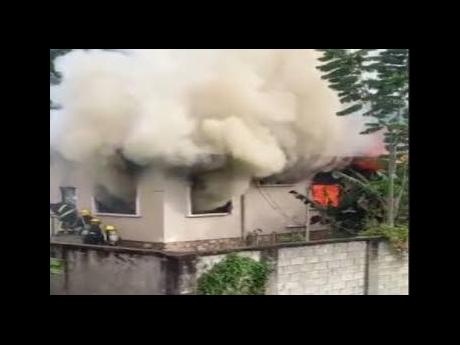 Contributed
Smoke billows from the house where three children lost their lives in a Monday morning blaze in Maraval, outside Port-of-Spain, Trinidad.

Three children died after a fire swept through a house in Maraval, just outside of the capital on Monday morning, fire officials have confirmed.

They said that the unidentified children were aged 17, six, and three years old.

The cause of the fire has not yet been disclosed, and eyewitnesses said that at least two children were able to escape the inferno with assistance from the public.

The screams of the children were heard in videos posted on social media and Assistant Chief Fire Officer Marlon Smith said that firefighters found the three bodies after the fire had been extinguished.

The body of the 17-year-old male was found in the gallery of the house, and that area was surrounded with burglar-proofing, making it impossible for him to escape.

The bodies of the three year-old male and the six-year-old girl were found in the front and back rooms, respectively.