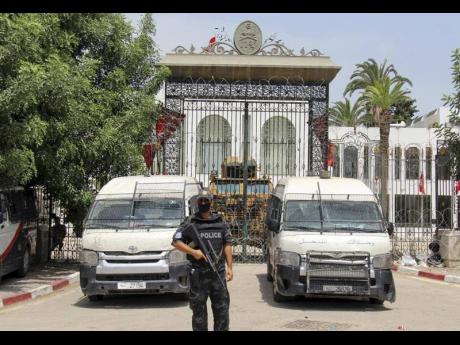 AP
Police cars and a military armored personnel carrier block the entrance of the Tunisian parliament in Tunis on Tuesday. The Ennahda party, has called for dialogue, following President Kais Saeid’s sacking of the prime minister and suspension of parliament on Sunday.

Tunisia’s president is proposing that hundreds of tycoons suspected of embezzlement reach a deal with the state to finance public hospitals, schools and development projects in poor regions, to avoid convictions.

President Kais Saied seized new political powers this week and is trying to tackle the corruption and tax evasion that have long plagued the economy, notably in the lucrative phosphate sector and food trading.

Saied is also seeking to counter accusations that his surprise decision to fire the prime minister and suspend parliament amounts to a coup. He insisted Wednesday on the “provisional” nature of the move and on his attachment to the freedoms and rights guaranteed in the Tunisian Constitution, created after protesters overthrew a dictator in 2011. The country is considered the only democratic success story resulting from the Arab Spring uprisings that year.

Saied met Wednesday night with the head of the Tunisian employers organisation, Samir Majoul, and proposed an unusual deal to some 460 leading business figures suspected of embezzling billions of dollars in the years leading up to Tunisia’s 2011 revolution.

To avoid legal action, Saied suggested reaching a settlement with the magnates under which they would finance development projects in poor regions, to “return the money looted from the Tunisian people”.

The businessmen’s names appear in a voluminous report established by an investigative commission in the aftermath of the revolution which overthrew autocratic leader Zine El Abidine Ben Ali in 2011. They are suspected of embezzling around 13.5 billion dinars (nearly US$5 billion) from state coffers.

Saied called out corruption in the phosphate sector, whose production has fallen significantly in recent years.

Phosphate producers “charge 25 dinars per ton for (truck) transport, whereas by train, it does not exceed seven dinars. They pay people to block the train and put obstacles on the tracks. It is not normal that Tunisia, which was the second-largest exporter of phosphate in the world, becomes an importer,” Saied said.

He also urged the president of the employers’ organisation to work with wholesale and retail traders to lower food prices by avoiding monopolisation and speculation.

Corruption was a major driver of Tunisia’s 2010-2011 revolution, and many Tunisians are frustrated that a decade of democracy has failed to wipe it out.