Evictions in US expected to spike as pandemic moratorium ends 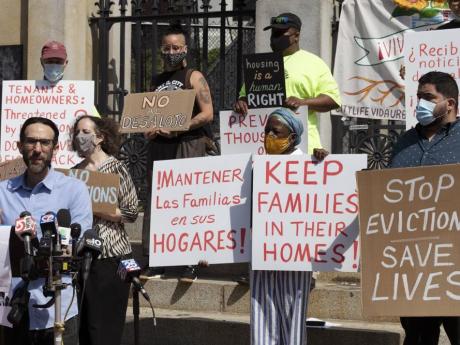 People from a coalition of housing justice groups hold signs protesting evictions during a news conference outside the Statehouse, Friday, July 30, 2021, in Boston. (AP Photo/Michael Dwyer)

BOSTON (AP) — Evictions, which have mostly been on pause during the pandemic, were expected to ramp up Monday after the Biden administration allowed the federal moratorium to expire over the weekend and Congress was unable to do anything to extend it.

Housing advocates fear the end of the Centers for Disease Control and Prevention moratorium could result in millions of people being evicted.

But most expect the wave of evictions to build slowly over the coming weeks and months as the bureaucracy of removing people from their homes restarts.

On Sunday night, House Speaker Nancy Pelosi and the House Democratic leaders called for the Biden administration to immediately extend the moratorium, calling it a “moral imperative” to prevent Americans from being put out of their homes during a COVID-19 surge.

The Biden administration announced Thursday it would allow the ban to expire, arguing its hands were tied after the US Supreme Court signalled the measure had to end.

“Struggling renters are now facing a health crisis and an eviction crisis,” said Alicia Mazzara, a senior research analyst at the Center on Budget and Policy Priorities.

“Without the CDC's moratorium, millions of people are at risk of being evicted or becoming homeless, increasing their exposure to COVID just as cases are rising across the country.

The effects will fall heavily on people of colour, particularly Black and Latino communities, who face greater risk of eviction and more barriers to vaccination.”

More than 15 million people live in households that owe as much as $20 billion to their landlords, according to the Aspen Institute.

As of July 5, roughly 3.6 million people in the US said they faced eviction in the next two months, according to the US Census Bureau's Household Pulse Survey.

Parts of the South and other regions with weaker tenant protections will likely see the largest spikes and communities of colour where vaccination rates are sometimes lower will be hit hardest.

But advocates say this crisis is likely to have a wider impact than pre-pandemic evictions.

The Biden administration had hoped that historic amounts of rental assistance allocated by Congress in December and March would help avert an eviction crisis.

But the distribution has been painfully slow.

Only about $3 billion of the first tranche of $25 billion had been distributed through June by states and localities.

Another $21.5 billion will go to the states.