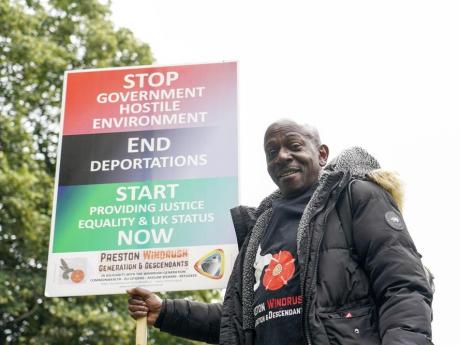 LONDON (AP) — Black people whose right to live in the United Kingdom was illegally challenged by the government marked the anniversary Sunday of the act that freed slaves throughout the British Empire, drawing a direct link between slavery and the discrimination they suffered.

Dozens of activists gathered in Brixton, a centre for the Black community in south London, to back the international drive for reparations for the descendants of enslaved Africans.

They also demanded legislation to compensate legal UK residents who were threatened with deportation in what is known as the Windrush Scandal.

“The Windrush injustice would not have happened if Africans were not torn from the continent of Africa,” said Kofi Mawuli Klum, organiser of the Emancipation Day event, which marked the 187th anniversary of the day in 1834 when slaves in the Caribbean and other parts of the British Empire were freed.

After the gathering, some activists travelled to Buckingham Palace, hoping to deliver a written appeal asking Queen Elizabeth II to back their call for a “Windrush Act″ to pay reparations to those hurt by the scandal.

They were turned away by palace guards, who told them to send their request through the mail.

The Windrush Generation refers to citizens of the British Empire who travelled to Britain between 1948 and 1973 after the government called on its colonies to send workers to help rebuild the country after World War II.

It draws its name from the ship that carried the first migrants from the Caribbean in 1948.

The Windrush scandal has rocked Britain since 2018 when many of these long-term legal residents were caught up in a crackdown on illegal immigration.

Thousands lost their jobs, homes and the right to free medical care, many because they arrived as children and couldn't produce paperwork proving their right to live in the UK.

Some were detained, and an unknown number were deported to countries they barely remembered.

A programme designed to compensate victims has been plagued by complaints that it is too slow, too cumbersome and the payments offered aren't high enough to make up for the harm done by the British government.

The Home Office, the government department responsible for the programme, in December acknowledged the “slow start” but said the program had been overhauled to make it simpler and faster.

The agency has paid almost 27 million pounds (US$37 million) in compensation, up from less than three million pounds at the time the overhaul was announced in December, it said.

Another 7.1 million pounds has been offered to victims.

The rally came just days after Parliament's Public Accounts Committee sharply criticised the government for failing the victims of the scandal.

Chair Meg Hillier, from the opposition Labour Party, said it was important to remember how grave the errors have been and that “people's homes, families and livelihoods were interrupted and uprooted, some were forced from the country.”