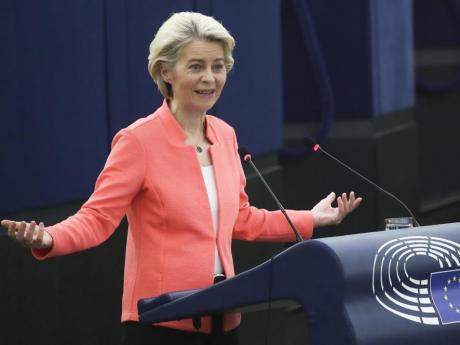 BRUSSELS (AP) — The European Union's top official said Wednesday that ramping up COVID-19 vaccinations around the world was the bloc's No. 1 priority right now and committed another 200 million vaccine doses to Africa and low-income nations.

European Commission President Ursula von der Leyen used her State of the European Union speech on Wednesday to announce the new donation that will be fully delivered by the middle of next year and comes on top of 250 million vaccine doses already pledged.

Even when rich nations are already contemplating giving a third booster vaccine shot to large swathes of their populations, most of the world's poorer nations are still waiting to be fully vaccinated, laying bare an acute sense of vaccine inequality.

“Our first and most urgent priority is to speed up global vaccination,” von der Leyen told European parliamentarians in a plenary left nearly empty because of continued virus regulations.

African health officials say they need just under 800 million doses to vaccinate 60% of the continent's population.

As of last week, 145 million doses had been procured, according to the Africa Centers for Disease Control and Prevention.

Just 3.5% of people across the continent of 1.3 billion people have been fully vaccinated, the CDC says, amid frustrations over hoarding, vaccine export controls and now the rollout of booster shots in richer countries.

Reacting to von der Leyen's announcement, Jagoda Munic, the director of Friends of the Earth Europe, said the EU should make COVID-19 vaccines and treatments a public good, accessible to everyone instead of relying on vaccine donations.